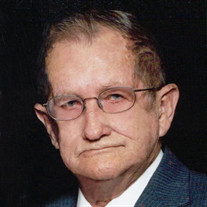 William Clint Fletcher, age 84, of Johnson City, Tennessee went home to be with the Lord on Saturday, June 13, 2020 from the Hillview Health Care Center of Elizabethton. Clint was born in Butler, Tennessee to the late John Clarence Fletcher and Bertha Berry Fletcher. In addition to his parents, he was preceded in death by his daughter, Kirsten Littleton; and two sisters, Phyllis White and Ruth Tinker. Clint retired from Pepsi Cola Bottling Company as a salesman and was a United States Army veteran. He attended Borderview Christian Church and enjoyed working outside and spending time with his great grandson. Those left to cherish his memory include his wife of sixty four years, Jane Bullock Fletcher, of the home; his granddaughters, Brye Fletcher-Guy and husband Daniel, of Unicoi and KasSandra Fletcher-Savage and husband Alex, of Johnson City; one great grandson, Rogan Savage, of Johnson City; and a sister, Shelby Medearis, of Johnson City. Several nieces and nephews also survive. The family will receive friends from 12:00 PM until 3:00 PM on Wednesday, June 17, 2020 at Tetrick Funeral Home of Elizabethton. A graveside service to honor the life of William Clint Fletcher will be conducted at 11:00 AM on Thursday, June 18, 2020 in the Mountain Home National Cemetery with Mr. Scott Fisher, officiating. Music will be provided by Ray Don Markland. Active pallbearers will be Keith Brown, Eddie Bowers, Paul White, Ronald White, Tom White and Daniel Guy. Honorary pallbearers will be Ben Medearis and Alex Savage. Those wishing to attend the graveside service are asked to meet at the cemetery at 10:50 AM on Thursday. Those who prefer memorials in lieu of flowers, may make donations to the Wounded Warrior Project, P.O. Box 758516, Topeka, KS 66675-8516. Online condolences may be shared with the family on our website, www.tetrickfuneralhome.com Clint and his family are in the care of Tetrick Funeral Home, Elizabethton. Office 423-542-2232, service information line, 423-543-4917.

William Clint Fletcher, age 84, of Johnson City, Tennessee went home to be with the Lord on Saturday, June 13, 2020 from the Hillview Health Care Center of Elizabethton. Clint was born in Butler, Tennessee to the late John Clarence Fletcher... View Obituary & Service Information

The family of William Clint Fletcher created this Life Tributes page to make it easy to share your memories.

Send flowers to the Fletcher family.