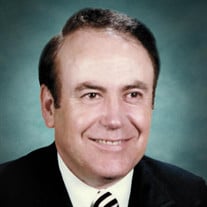 William C. Cook passed away unexpectedly at home Wednesday, February 2, 2022. He was a native of Pineville, West Virginia, the son of the late Charles H. Cook and Nyanza Belcher Cook. He was also predeceased by two brothers, Ronald M. Cook and Bernard H. cook; three sisters, Ruby Thompson, Geneva Mason, and Pauline Allen Raymond; two nephews, Gary Cook and Tony Mason. He is survived by his beloved wife Peggy Colyer Cook and his dear and devoted son William (Billy) Cook, three nieces and three nephews. Bill became a member of Turkey Creek Baptist Church in West Virginia at an early age. He attended River of Life Church, Piney Flats, Tennessee and Westview Church of Christ, Jonesborough, Tennessee, when his health permitted. Bill volunteered for military service and was a member of the US Air Force 1951-1955. After being honorably discharged, he began his career as a federal civil servant with the Security Division, Aberdeen Proving Ground, MD. Later he transferred to Edgewood Arsenal, MD, as manager of the communication center. He then transferred to Ft. Devens, MA, as the Deputy Director of Communications Electronics. In 1968, he accepted the position of Deputy Director of Communications Electronics at Ft. Meade, MD, and later became the Director, US Army Strategic Communications Command, Ft. Meade, MD, where he remained until retirement in 1986 after thirty-five years of service. Bill was an avid tennis player and loved football and basketball. He was a member of AF & AM #44 Mt. Ariat Masonic Lodge in Belair, MD. Bill will be forever remembered as a loving, kind, caring and generous man. He would want to give a big thank you to Dr. Christina Hutchins and staff for the years of care he received. Also, to special friends and neighbors Jerry and Patti Hodges, Richard and Donna Pierce, Jason and Jane Story, all of Jonesborough, and Jeff and Bernice Krouse of PA. He would also like to thank Charlie Whitehead for his support and care through the years. The life of William C. Cook will be recognized with military honors and masonic rites on Tuesday, February 8, 2022, at 11:00 AM in the Chapel Mausoleum at Washington County Memory Gardens. In lieu of flowers, the family requests that donations in honor of Bill Cook be made to Shriner’s Children’s Hospital or to St. Jude’s Children’s Hospital. Memories and condolences may be shared at www.tetrickfuneralhome.com. Tetrick Funeral Services 3001 Peoples Street Johnson City, TN 37604 (423-610-7171) is honored to serve the Cook family.

The family of William C Cook created this Life Tributes page to make it easy to share your memories.

Send flowers to the Cook family.