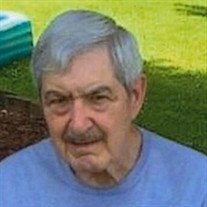 Wilburn K. White, 78, of Johnson City, passed away on Wednesday, September 9, 2020 at his residence surrounded by his loving family. He was the son of the late Charles K. White and Mable Stamper White, born to them February 26, 1942 in Honaker, Virginia. In addition to his parents, he was preceded in death by his sister, Earlene Hite, and brothers Joe and Wondell White. He met his life partner, Loretta, in 1st grade and was happily married to her for 58 years. He was in the banking business and worked for First Tennessee Bank for 30 years, retiring as Vice President, Manager of Corporate Real Estate. Besides his wife, he had a passion for gardening and his grandkids. People would come to marvel at his garden each year and he would proudly take his grandchildren to show them off. Anyone that knew him, knew how much he adored them! In addition to his wife, he is survived by two daughters, Cristy (Joe) Ferraro, and Kerri (Steve) Miller. He is also survived by four grandchildren, Dusty Chambers (Carrie), McKenzie Beeler (Brock), Kirsten and Cole Ferraro; brothers: Lynn and Elmer White; several nieces and nephews. The family will greet friends to share memories on Saturday, September 12, from 12:00 pm until a Celebration of Wilburn’s life at 1:00 pm in the Sunrise Chapel of Tetrick Funeral Services, Johnson City, with Pastor Sam Haynes officiating. A Graveside service will follow at Washington County Memory Gardens. Active pallbearers will be Dusty Chambers, Cole Ferraro, Brock Beeler, Steve Miller, Joe Ferraro, and Stephen Haynes. Because of his love for children, in lieu of flowers, memorials may be made to St. Jude’s Children’s Hospital, 262 Danny Thomas Place, Memphis, TN 38105. Memories and condolences may be shared at www.tetrickfuneralhome.com. Tetrick Funeral Services 3001 Peoples Street Johnson City, TN 37604 (423-610-7171) is honored to serve the White Family.

Wilburn K. White, 78, of Johnson City, passed away on Wednesday, September 9, 2020 at his residence surrounded by his loving family. He was the son of the late Charles K. White and Mable Stamper White, born to them February 26, 1942 in Honaker,... View Obituary & Service Information

The family of Wilburn K. White created this Life Tributes page to make it easy to share your memories.

Wilburn K. White, 78, of Johnson City, passed away on Wednesday,...

Send flowers to the White family.