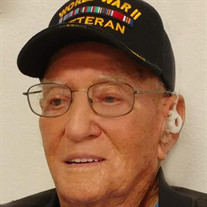 Wayne Gerdes “Pop”, age 95, of Elizabethton, Tennessee went home to be with the Lord on Wednesday, February 16, 2022 at the Sycamore Shoals Hospital. Wayne was born in Springfield, Illinois to the late Otis Earl Gerdes and Lillie M. Stroh Gerdes. In addition to his parents, Wayne was also preceded in death by his wife, Dixie C. Gerdes; a daughter, Brenda Rice; a sister, Robertine Ward; and two brothers, Russell Gerdes and Delbert Gerdes. Wayne had been employed as an operating engineer of local 965 in Springfield, Illinois and was a United States Army World War II veteran, having served in the 17th Infantry. Those left to cherish Wayne’s memory include his daughter, Jennifer A. (David) Rouse of Prescott Valley, Arizona; five stepchildren, Stephen (Tammy) Bentley of Elizabethton, Carolyn (Doug) Church of Florida, Donetta (Josue) Aguirre of Florida, Timothy (Diane) Bentley of Arizona and Larry (TJ) Bentley of Elizabethton; and a brother, Douglas Gerdes of Illinois; eight grandchildren; twenty great grandchildren; and twelve great great grandchildren. Several nieces and nephews also survive. A service to celebrate Wayne’s life will be conducted at 2:00 PM on Monday, February 21, 2022 in the Chapel of Peace at Tetrick Funeral Home of Elizabethton with Pastor Kenley Knight officiating. The family will receive friends from 12:00 PM until 2:00 PM in the funeral home chapel prior to the service on Monday. A private graveside service will be conducted at Washington County Memorial Gardens at a later time. The family would like to thank the nurses at Life Care Center of Elizabethton and the nurses of Sycamore Shoals Hospital for their special care. Words of comfort can be sent to the family through our website, www.tetrickfuneralhome.com. Tetrick Funeral Home, 211 North Riverside, Elizabethton, TN 37643 (423) 542-2232 is honored to serve the Gerdes family.

Wayne Gerdes &#8220;Pop&#8221;, age 95, of Elizabethton, Tennessee went home to be with the Lord on Wednesday, February 16, 2022 at the Sycamore Shoals Hospital. Wayne was born in Springfield, Illinois to the late Otis Earl Gerdes and Lillie... View Obituary & Service Information

The family of Wayne "Pops" Gerdes created this Life Tributes page to make it easy to share your memories.

Send flowers to the Gerdes family.