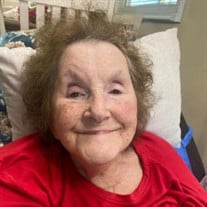 Violet Evelyn Bowman, age 84 of Johnson City, Tennessee, passed away at her home on Monday, November 29, 2021. She was a daughter of the late Lon and Louise Carter Neal, born to them on May 28, 1937 in Johnson City, Tennessee. Violet lived in the Asbury community and worked for K-mart, until her daughter was born. Then she decided to become a homemaker. She greatly enjoyed word search puzzles, watching game shows on television, her flowers, hummingbirds and her special dog, Maddie. Along with her parents, she is preceded in death by her husband, Buddy Bowman, who was retired from the Eastman Chemical Company and United States Army; an infant daughter, Melinda Bowman, her brothers, Norman and Harold Neal; and a sister, Betty Ginley. Violet is survived by her loving daughter, who was her caregiver and her friend for the last three years Lisa Tipton; a son, Jesse Bowman; her triplet grandsons who were dear to her heart, who they called their Nanny, Thomas, Michael and Christopher Tipton (of The United States Navy); her brothers, Buford Neal and Tom Neal (Nancy); her sister, Carolyn Presnell (David), a special nephew, Jimbo “Snookie” Ginley. She is also survived by several relatives and friends left behind to cherish her memory. Funeral services for Violet Evelyn Bowman will be held on Saturday, December 4, 2021 at 1:00 P.M. in the chapel of Tetrick Funeral Services with Rev. James Ginley and Chaplain Steven Spell officiating. Burial will follow in the Monte Vista Memorial Park at 2:00 P.M. with Violet’s grandsons, James Ginley and Keith Tipton serving as pallbearers. The family will receive friends at the funeral home on Thursday, December 4, 2021 after 12:00 noon until the hour of service at 1:00 P.M. Memories and condolences may be shared at www.tetrickfuneralhome.com. Tetrick Funeral Services 3001 Peoples Street Johnson City, TN 37604 (423-610-7171) is honored to serve the Bowman Family.

The family of Violet E. Bowman created this Life Tributes page to make it easy to share your memories.

Send flowers to the Bowman family.