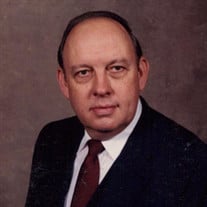 Verlon R. Henson, born April 8, 1930, passed away peacefully and went to his Eternal Home after a battle with pulmonary fibrosis, on March 3, 2022. Verlon was a resident of Johnson City since 1958. He was born and raised in Murphy, NC to the late Willie D. Henson and Della Mae Henson Griffith. He was a longtime member and usher of North Johnson City Baptist Church. Verlon left home in 1948 and rode a bus to Detroit, MI where he begin his manufacturing career with Chevrolet Gear and Axle. Verlon later went to work for Martin Aircraft in Baltimore, MD, Raytheon in Bristol, TN and then Lockheed Aircraft in Marietta, GA. Verlon then came back to Johnson City where he worked for ADC Magnetics, Hammond Organ, Thor Power Tools and later retired from Snap-on Tools. He enjoyed kidding and telling people that his wife had one job in forty years and he had forty jobs in forty years. Verlon was a diehard bluegrass music fan of the early pioneers, Bill and Charlie Monroe, Flat and Scruggs, Jimmy Martin and the Stanley Brothers. He loved attending the early festivals of the 60’s and 70’s, with his son. Verlon was a car guy and loved telling stories of his first car being an A-model strip down to burning the roads down in his ‘49-’57 Fords, driving all night from Baltimore, MD to Murphy, NC. In Verlon’s spare time he raised a garden for fifty-five straight years and was selected by Senior Friends Magazine in 2003 as a master in his craft and the publication was distributed to seniors nationwide. Verlon was always very appreciative of all the local doctors and healthcare providers that cared for him throughout his life. Namely, Dr. Bailey, Dr. Grosserode, Dr. Allison, Dr. Chang, Dr. Aziz, Dr. Tom Huddleston, Dr. Shahbazi, Dr. Oakley, Dr. Busscher, Dr. Farrow, Dr. Anderson, Dr. Holt, Dr. Westmoreland and Dr. Michael. A special thanks to Beth Dolinger with home healthcare therapy and the Boones Creek Cracker Barrel staff for Verlon’s daily to-go order of pecan pancakes. Verlon’s generation has commonly been referred to as “The Greatest Generation,” which he truly lived up to, and was blessed with, “a life well lived.” He was preceded in death by his brother Doyle Henson. Verlon is survived by his loving wife of over sixty-seven years, Anna Stiles Henson; son, Perry and wife Terry Hundley Henson; grandchildren, who he cherished more than words can describe, Dustin Henson and girlfriend Myka Baker, Leah Henson Frazier and husband Jacob. The family of Verlon Henson will have a graveside service at 2pm, Thursday, March 10, 2022 at Washington County Memory Gardens, with Pastor Rick Powell and Rev. Ray Bailey officiating. Memories and condolences may be shared at www.tetrickfuneralhome.com. Tetrick Funeral Services, 3001 Peoples Street Johnson City, TN 37604 (423-610-7171), is honored to serve the Henson Family.

Verlon R. Henson, born April 8, 1930, passed away peacefully and went to his Eternal Home after a battle with pulmonary fibrosis, on March 3, 2022. Verlon was a resident of Johnson City since 1958. He was born and raised in Murphy, NC to the... View Obituary & Service Information

The family of Verlon R. Henson created this Life Tributes page to make it easy to share your memories.

Send flowers to the Henson family.