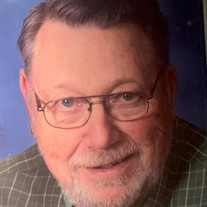 Tommy R. Johnson, age 73, passed away unexpectedly at his home on Friday, July 10, 2020. He was born in Elizabethton, TN and was the son of the late Charles Raymond Johnson and Oda Marie Oaks Johnson. In addition to his parents he was preceded in passing by two siblings; Ruby Johnson and Roberta Woods and one nephew Chucky Woods. Tommy was a simple man who loved to farm and help others. Upon coming home from the Marine Corps he began farming. He owned Johnson’s Small Fruits in Elk Park, NC for nearly 51 years. In addition to his love for farming he was an avid beekeeper as they helped to pollinate his orchards and crops. He was a man of faith and was a member of Centerview Church of Christ. He had been a teacher of the Bible for 40 years. He loved spending time with his family, cooking out and eating. He was known as the man who could fix or build anything and often was known for making his own machines used on the farm when store bought just would not do. He was awarded “Farmer of the Year” on a couple of occasions, and more heroically a Purple Heart during his time as a Marine in Vietnam. Tommy is survived by his loving wife of 55 years, Sandra Shell Johnson; children; Sherri Davis and husband David, Roan Mountain, TN, and David Todd Johnson and wife Kathy, Powell, TN; grandchildren; Jessica Sparks, Derek Russell, Shelby Stout and Emily Davis; great grandchildren; Sebastian Russell, Brooklynn Sparks, Tanner Sparks, Paislee Dugger and Oakleigh Dugger; special nephews; Arnold, Roger and Scott Woods and special friend and employee, Leo Lomeli. The services of the late Tommy Johnson will be held at Tetrick Funeral Home- Rhododendron Chapel in Roan Mountain on Wednesday, July 15, 2020. The visitation will be held from 11:00am – 2:00pm with a service officiated by Ministers, Tony Hoss and David Irick. A committal will immediately follow at Taylor’s Chapel in Elk Park, NC. The family will be going in procession. Pallbearers will be selected from family and friends. Online condolences may be shared with the family on our website, www.tetrickfuneralhome.com. Mr. Johnson and his family are in the care of Tetrick Funeral Home, Elizabethton. Office 423-542-2232, service information line, 423-543-4917.

Tommy R. Johnson, age 73, passed away unexpectedly at his home on Friday, July 10, 2020. He was born in Elizabethton, TN and was the son of the late Charles Raymond Johnson and Oda Marie Oaks Johnson. In addition to his parents he was preceded... View Obituary & Service Information

The family of Tommy R. Johnson created this Life Tributes page to make it easy to share your memories.

Tommy R. Johnson, age 73, passed away unexpectedly at his home...