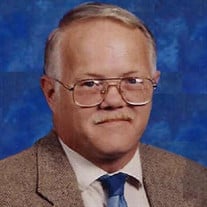 Click here to view a live stream of Mr. Lusk's Funeral Service Steven Dale Lusk, 72, of Johnson City, passed away on Friday, December 10, 2021 at the V.A. Medical Center Mountain Home, TN. He was born on September 18, 1949 in Binghamton, NY and was the son of the late Charles William and Lorraine Lusk. In addition to his parents, Steve was preceded in death by his son, Sr. Airman Michael Lusk, and brothers, Chuck and Harry Lusk. Steve proudly served his country in the U.S. Marine Corps for 10 years. He did two tours in Vietnam, and two years in the mine fields of Guantanamo Bay, Cuba. He tried civilian life but, it wasn’t to his liking so he finally joined the U.S. Army and served for twelve years. Steve’s picture was in Newsweek magazine. He was a published author of song books, A Roar in the East,and Brown Gold. Steve was a former commander of VFW Post 2332 in Johnson City, NY. He could be very outspoken, especially of our political leadership. Steve loved life but unfortunately covid took that away. His motto was “Once a Marine, Always a Marine”. Those left to cherish memories of Steve include his loving wife of 49 years, Alta May Lusk, sons: Steven D. Lusk II, Charles Lusk and wife Felicia (boys, Jaylyric, Kyle, Dontaye), Richard S. Lusk and Adam Perry and his wife Jamie (Adalade, Marvel, and Emerson); siblings: Dennis (Margaret) Lusk, Celia (Jim) Hill, Jacquelyn (Steve) Poole, and Lana (Gene) Branson, several nieces, nephews, cousins and numerous friends, and also his loving cats, Stalker, Alana, and Simon. In lieu of flowers the family asks that donations be sent to Wreaths Across America, 53 Memorial Avenue Mt. Home, TN 37684. Steve’s family would like to offer a special thank you to Rolling Thunder, DAV Chapter 9, DAV Auxillary Unit 9, Dog Tag Brigade, the Bread of Life Fellowship and other organizations for all of their support during this difficult time. The family will gather to greet friends on Sunday, December 19, 2021 from 3:00 pm until 5:00 pm at Tetrick Funeral Services, Johnson City. A Celebration of Steven’s Life will be held at 12 pm on Monday, December 20, 2021 at the funeral home with Pastor Todd Ellis officiating. A Military Graveside and Committal Service will be held at 2:00 pm on Monday at Mountain Home National Cemetery with full military honors. Family and friends will serve as pallbearers. Memories and condolences may be shared at www.tetrickfuneralhome.com. Tetrick Funeral and Cremation Services 3001 Peoples Street Johnson City TN 37604 (423-610-7171) is honored to serve the Lusk family during this difficult time.

The family of Steven Dale Lusk created this Life Tributes page to make it easy to share your memories.

Send flowers to the Lusk family.