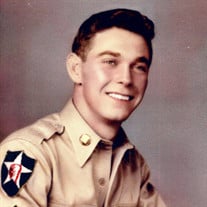 Stephen Boyd Terry left this temporary home on June 8, 2021, in the loving arms of Jesus Christ. He was born in Marion, VA on July 6, 1931, to Rufus Edison Terry and Francis Louise Richardson Terry. He attended Marion High School then joined the United States Army in 1949, he fought in the Korean War and served as a Gunner in the Artillery Unit, his rank was Corporal. He was honorable discharged on June 11, 1952. He then started working for the United Telephone System, where he worked for 41 years as a Business Services Technician II. Stephen believed with hard work came success. He met the love of his life Betty Roberts in 1953, and married in October of the same year. In 1956 they started a family. Stephen believed in family and loved his family dearly. He was a Christian and believed in Jesus Christ and loved the Lord with all his heart. He was a very generous and supportive person, especially when it came to family. He loved to go fishing and be outdoors, when he was able, he and his wife kept a garden, tilling before spring and canning during the fall. Getting together with family during cookouts, birthdays, Thanksgiving and Christmas were his favorite times of the year. He loved sports especially college football. Tennessee Volunteers was his favorite team. After retiring from the telephone company in July of 1993, he spent his days with Betty, they loved to go places together like the lake, visit family, or just sit on the front porch taking in some fresh air. When Betty started having health issues he took care of her, everything he did, he did for Betty. Stephen was a strong, loving, caring, and faithful man who will be greatly missed by his family and friends. He was preceded in death by his wife Betty Jane Roberts Terry on June 7, 2019, and before his wife he was preceded in death by his parents; three brothers, Richard, Thomas, and Philip Terry; one sister, Jaqueline Terry Nietch and one grandson, Daniel Goddard. Those surviving are his four children along with their spouses, Dexter Terry and his wife Maxine, Bristol, VA; Doug Terry and his wife Lisa, Erwin, TN, Anita Goddard and her husband Robert, Gray, TN and Anthony Terry and his wife Becky, Seymour, TN.; one brother, Justin Terry and his wife Christine; 10 grandchildren and 6 great-grandchildren; several nieces and nephews. Special Thank you to Amedisys Hospice in Elizabethton, The Veterans Administration, Johnson City Internal Medicine Dr. Nerren and his nurses and Rhonda Way, TN Cancer Specialist, Dr. Tumkur, his nurses and staff. The family of Stephen Boyd Terry will receive friends from 12 to 2 PM Saturday, June 12, 2021, in the Tetrick Funeral Services Chapel. The funeral service will follow at 2 PM with Chaplain Steven Spell officiating. The graveside committal service will follow in the Washington County Memory Gardens. Active pallbearers will be selected from family and friends. The Johnson City VFW Post # 2108 will accord military honors.

The family of Stephen Boyd Terry created this Life Tributes page to make it easy to share your memories.

Send flowers to the Terry family.