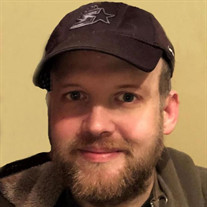 Stephen “Stevie” Paul Warren Jackson, age 41 of Roan Mountain, Tennessee, passed away unexpectedly on Saturday March 5, 2022 at his residence. Stevie Jackson is preceded in death by his father, Stephen Paul Jackson; maternal grandparents, Warren and Nell Shell. Stevie Jackson enjoyed guns, movies, being in the outdoors and spending time with his family. Those left to cherish his memory include mother, Rita Shell Jackson of Marion, NC; step-father, Ricky McKinney of Marion, NC; a sister, Summer Whisenhunt and husband Philip of Piney Flats, TN; a special niece, Gracie Whisenhunt of Piney Flats, TN; a special cousin and friend, Sherry Byrd. Several aunts, uncles and cousins also survive. A service to honor the life of Stevie Jackson will be conducted on Thursday, March 10, 2022 at 6:30pm in the Rhododendron Chapel at Tetrick Funeral Home of Roan Mountain with Pastor Derrick Hughes officiating. The family will receive friends prior to the service from 5:00pm until 6:30pm at the Funeral Home on Thursday or at the residence at any time. A graveside service and interment will be conducted at Perry Cemetery on Friday, March 11, 2022 at 11:00am. Pallbearers will include Robby Byrd, Noah Stout, Lee Bare, Ricky McKinney, Brandon Jones and Brody Shell. Honorary Pallbearers will be Travis Caraway and Clint Gouge. Those who wish to attend are asked to arrive at the Funeral Home at 10:30am to travel in procession to the cemetery. Words of comfort can be sent to the family through our website, www.tetrickfuneralhome.com. Tetrick Funeral Home-Roan Mountain 8460 US-19E, Roan Mountain, TN 3768, is honored to serve the family of Stevie Jackson.

The family of Stephen Paul Jackson created this Life Tributes page to make it easy to share your memories.

Send flowers to the Jackson family.