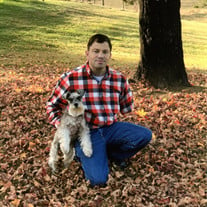 “I have fought the good fight, I have finished the race, I have kept the faith.” 2nd Timothy 4:7 Scott Saylor, age 46, of Gray, Tennessee, passed away on June 28, 2020, at his home, surrounded by family. Scott was born on July 6, 1973, in Johnson City, Tennessee. He is the son of Jeanne Keebler and the late Lee Saylor. Scott was a resident of Gray his whole life. He was a baptized member of Hales Chapel Christian Church. Since infancy and throughout his life, Scott battled numerous forms of cancer and other serious medical conditions. Though he was never in good health, he always took pride in hard work. During his life, even while undergoing cancer treatments, he worked at Walmart, Levi Straus, a printing company, and for over 15 years at Lowe’s. Throughout it all, Scott never gave up and remained strong and positive. Scott was hard-working, generous, and tough as nails. He loved his pet schnauzers, working on electronics, traveling, music, and spending time with friends and family. He was a wonderful, loving, and devoted son, brother, and friend. He was preceded in death by his father Lee Saylor, his maternal grandparents James and Mary Sue Keebler, and his paternal grandparents Vernon and Pearl Saylor. He is survived by his mother, Jeanne Keebler, his brother, Jeffrey Saylor (Suzanne), his aunts Judy Wheelock (Eddie) and Rose Ann Fleenor (Jackie), and his cousins, nieces, and nephew. The family will greet friends to share memories on Wednesday, July 1, 2020 from 5:00 pm until a Celebration of Scott’s life at 7:00 pm in the Sunrise Chapel of Tetrick Funeral Services with Mr. Clint Andrews, minister officiating. A Graveside service will be held at 11:00 am on Thursday in the mausoleum chapel of Washington County Memory Gardens. Family and friends will serve as pallbearers. Everyone is asked to meet at the cemetery by 10:50 am. In lieu of flowers, donations may be made to the Washington County-Johnson City Animal Shelter, 3411 N. Roan Street, Johnson City, TN 37601. This obituary was lovingly written by Scott’s family. Memories and condolences may be shared at www.tetrickfuneralhome.com. Tetrick Funeral Services, 3001 Peoples Street, Johnson City, TN 37604 (423-610-7171) is honored to serve the Saylor family.

The family of Scott Saylor created this Life Tributes page to make it easy to share your memories.

“I have fought the good fight, I have finished the race, I have...

Send flowers to the Saylor family.