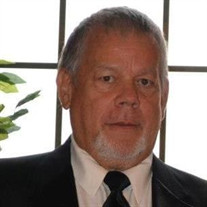 Samuel "Terry" Pritchard passed away peacefully on November 7th 2021 at the age of 76. Terry was a native of Roan Mountain TN and was the son of Hobert and Oline Pritchard. He was a loving father and grandfather who enjoyed his family the most. He also loved gardening and was known in the Crabtree community for his amazing gardens and the best tasting tomatoes. He had a passion for Cloudland football as well and kept up with every game. He was a kid at heart who was always pulling pranks and telling stories. He loved making people laugh and his family will hold each prank and story in their hearts. Terry served in the United States Army 17th Cavalry Regiment during the Vietnam War from April 1966- March 1969. For his service he was awarded 2 Bronze Stars and Combat Infantry Badge. He was very proud to have served his country. He is proceeded in passing by his father and mother, his son Jon Pritchard, a sister Gail Burleson and two nephews. Left to cherish him is his two daughters and their husband's, Ericka and LTC Shawn Dillingham, Elisha and Richard Sheppard, four grandsons Eli and Joshua Dillingham, Stanton and Isaiah Sheppard, his brother and wife Rod and Lisa Pritchard and a sister Carolyn Tipton as well as nieces and nephew whom he loved dearly. The family would like to thank Kindred at Home and Hospice of the Blueridge for caring for Terry while at home. They would also like to thank Waters of the Roan and Caris Healthcare for the care and love they showed him as well. A graveside service to honor the life of Samuel “Terry” Pritchard will be conducted at 11:00 AM on Monday, November 15, 2021 in the Mountain Home National Cemetery, New Annex – 215 Heroes Drive, Mountain Home, Tennessee with Pastor Richard Sheppard, II (son-in-law) officiating. Active pallbearers will be Victor Burleson, Julian Burleson, Ryan Tipton, LTC Shawn Dillingham, Johnny Angel and Ryan Sheppard. Honorary pallbearers will be his grandsons, Eli and Joshua Dillingham, Stanton and Isaiah Sheppard. Those wishing to attend the service are asked to meet at the cemetery at 10:50 AM on Monday. Those who prefer memorials in lieu of flowers may make donations to Homeless Veterans, Use the eDonate option on VA’s website to donate online. Please specify you want the funds to be used to help Veterans who are homeless or at-risk. Or to Disabled Veterans, www.DAV/donate.org. Online condolences may be shared with the family on our website, www.tetrickfuneralhome.com, Tetrick Funeral Home, Elizabethton is honored to serve the Pritchard family. Office 423-542-2232, service information line, 423-543-4917.

Samuel "Terry" Pritchard passed away peacefully on November 7th 2021 at the age of 76. Terry was a native of Roan Mountain TN and was the son of Hobert and Oline Pritchard. He was a loving father and grandfather who enjoyed his family the most.... View Obituary & Service Information

The family of Samuel "Terry" Pritchard created this Life Tributes page to make it easy to share your memories.

Send flowers to the Pritchard family.