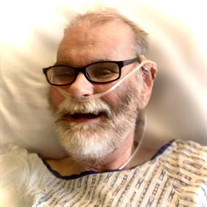 Obituary for Mr. Chambers Samuel Bell Randolph Chambers was born on May 24, 1956, to James Bell Chambers and Alta Beyrle Collette Chambers. At least that is the date of birth on his birth certificate. His father said the date was recorded incorrectly, and that Sam was born on May 25, 1956. May 25 was also his grandfather E.L. Chambers’ birthday, and the date Sam would rattle off when asked about his birthday. Sam lost his mother in March 1961, when he was five. He continued to live in TN with his father until November 1979 when his father passed away. Sam then traveled to Georgia with his brother Richard. Shortly after arriving there Richard’s wife Rosalee found Sam a home with Normal Life of GA in Valdosta close to their home in Hahira. Sam spent almost 43 happy years there flourishing in the GA sunshine. He rode his bike all over the town of Valdosta and lived his life with great happiness. He traveled to many places. Mostly with the Parks family who loved and oversaw Sam for 15 years until COVID appeared. Sam was both a good listener and a good conversationalist. Almost everyone he knew loved him. His doctors often remarked that Sam was the happiest man they ever met, and he charmed all the nurses. Sam loved his old westerns and enjoyed watching them often drifting off to sleep with the TV blasting. Sam’s real delight, though, lay in his nieces and nephews. He often called to check on them and had to ask about each one before being satisfied. He also loved to phone his many cousins. One of his greatest joys was having his niece Heather visit him while he was in the hospital in Tallahassee. LARC employed Sam for nearly 40 years. He worked in their recycling center and held jobs in amusement centers, landscaping, and in a restaurant. He retired from LARC in March 2020 and often went back to spend his days there. He found it hard to be idle when he retired. As many of you may remember, trauma at birth developmentally delayed Sam regarding education. However, God blessed Sam with bushels of charm, wit, and a presence few could touch. Sam was the shining star of our family tree. With his incredible memory, he was the keeper of the family stories and traditions. Sometimes he could get his facts a bit confused which could cause some frustration. Sam would flash his smile and say “excuse me, I forgot” making it easy to forgive Sam during those moments. Sam attended Morning Star FWB Church with the Parks family and Sam knew Jesus. His sister, Rev. Boley, baptized him in his hospital room. Shortly after, Sam told a visiting Chaplin, “Yes I have a father and Jesus Christ is his name”. His older siblings and their spouses preceded Sam in death, James Chambers Jr; Richard Wayne Chambers (Rosalee); Jessie Chambers Tittle (Robert). His younger brother E Donald E (Woodchuck) Chambers preceded him in death on May 5, 2021. As well as a nephew, Dale Tittle. Surviving Sam are his sister-in-law, Cheryl Chambers of Sparks, NV and his sister, Saundra Boley (Brian) of Parkersburg, WV. As well as Sam’s dearly loved nieces and nephews: Heather Winters Perry (David) of Myrtle Beach, SC, Hollie Winters Uthlaut (Captain Andrew C) of Atlanta, GA, Ian Bryce Boley (Clara) of Vietnam, Jessie Boley of Fairbanks, AK, Rev. Andrew Boley of Mill Creek, WV, Diane Tittle Elifritz of Sun Valley, NV and Brian Tittle of Stead, NV. He also had several great-nieces and nephews, among them are Logan, Alexis, Makinzi, Gavin, Ryan, Tristin and Micah. He also had a great-great-nephew, Jaxton, and a great-great niece, Juniann. Even though we rejoice at Sam’s healing and arrival home, those of us that knew and loved Sam will miss him greatly. A graveside service to celebrate Sam’s life will be conducted at 1:00 PM on Tuesday, May 3, 2022 in the Hall Cemetery in the Tiger Creek Community of Hampton, Tennessee with Rev. Brian Boley, Rev. Saundra Boley, and Rev. Andrew Boley conducting the service. Those wishing to attend the graveside service are asked to meet at the cemetery at 12:50 PM on Tuesday. Words of comfort can be sent to the family through our website, www.tetrickfuneralhome.com. Tetrick Funeral Home-Riverside Chapel, 211 North Riverside, Elizabethton, TN 37643 (423) 542-2232 is honored to serve the family of Samuel Bell Randolph Chambers.

Obituary for Mr. Chambers Samuel Bell Randolph Chambers was born on May 24, 1956, to James Bell Chambers and Alta Beyrle Collette Chambers. At least that is the date of birth on his birth certificate. His father said the date was recorded... View Obituary & Service Information

The family of Samuel Bell Randolph Chambers created this Life Tributes page to make it easy to share your memories.

Send flowers to the Chambers family.