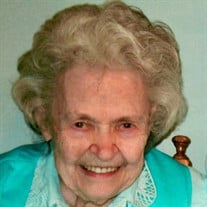 Ruth S. Hanle, 98 of Piney Flats, passed away Sept. 27, 2021 at the Johnson City Medical Center, Johnson City, TN. Mom lived 93 years in NJ. She enjoyed telling people that she was born in Wuhu, China to missionary parents. God was always a focus for living her life. In High School, she belonged to the Elizabeth Prayer Fellowship, where she met her future husband, Edwin Hanle. After high school, she earned an Associate degree from a women’s college, now Averett University, in Danville, VA, after graduation, she married her high school sweetheart, Edwin Hanle Sr. Family was very important to mom. After being a stay-at-home mom for her two children, Edwin Jr. and Joyce Cottrell, she worked at Fuel Oil Supply doing the math for calculating degree days without a computer. Later, she served as church secretary, for several years, at the Christian & Missionary Alliance Church in Cranford, NJ. In 1983, Ruth and Ed built a home in Pine Beach, NJ where they lived until 2016, when they left to live with her daughter and son-in-law, Steve Cottrell, in Sweetwater, TN. They moved to Piney Flats in 2018. She is fondly remembered by her daughter, 5 grandchildren and 14 great-grandchildren.

The family of Ruth S. Hanle created this Life Tributes page to make it easy to share your memories.

Send flowers to the Hanle family.