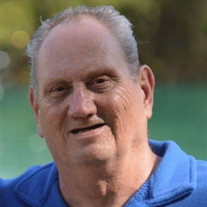 Ronald Boblett, age 68 of Jonesborough, Tennessee, passed away peacefully on Sunday, April 18, 2021 in the Johnson City Medical Center. He was a son of the late Kenneth and Emma Thomas Boblett, born to them on January 16, 1953 in Baltimore, Maryland. He proudly served his country in the United States Army. He worked many years for the Anne Arundel County water district and retired in 1985. He was a dedicated husband, loving father and grandfather and was devoted to his family and friends. Along with his parents, he is preceded in death by a brother, Ralph Boblett, his mother-in-law, Lorraine Shaver; his brother-in-law, David Dula Jr. and a special aunt, Connie Hayden. He is survived by his loving wife of 44 years, Sharon Shaver Boblett; his children, Tammy Erbe (Billy) and Angie Blevins; his brothers, Kenny and Terry Boblett; his grandchildren, Bri and Liam Erbe, and Jaylen and Kaynen Blevins; his father-in-law, Walt Shaver; Brother-in-law, Walt Shaver, Jr, sister-in-law, Lisa Williamson (Steve), a nephew, Paul Shaver (Ondi) a niece, Natalea Shaver. He is also survived by a host of many other nieces, nephews and dear friends left behind to cherish his memory. The family would like to extend a special thank you to Dr. April Edwards for going above and beyond and working tirelessly towards a healthy outcome. We were truly blessed to have had you! A memorial service to honor Ronald’s life will be held at a later date. Memories and condolences may be shared at www.tetrickfuneralhome.com. Tetrick Funeral Services 3001 Peoples Street Johnson City, TN 37604 (423-610-7171) is honored to serve the Boblett Family.

Ronald Boblett, age 68 of Jonesborough, Tennessee, passed away peacefully on Sunday, April 18, 2021 in the Johnson City Medical Center. He was a son of the late Kenneth and Emma Thomas Boblett, born to them on January 16, 1953 in Baltimore,... View Obituary & Service Information

The family of Ronald Boblett created this Life Tributes page to make it easy to share your memories.

Send flowers to the Boblett family.