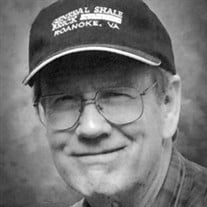 Robert E. Whittemore of Johnson City, passed away Sunday, February 13, 2022 at the age of 79, at the Life Care Center of Gray. Robert graduated from Norview High School, Norfolk VA, and attended Virginia Polytechnic Institute in Blacksburg, where he received a Bachelor of Science Degree in Business in 1966. Later he received a BS degree in Geology from The University of the State of New York, Albany. Recommended by Drs Lowry & Cooper for a position at General Shale Brick in Johnson City, Robert worked there from 1969-2007 as Chief Geologist.. During his years at VPI, he was an active member of the VPI Cave Club where he taught new cavers the art of all aspects of caving. He & members of the Cave Club worked with Dr John Holsinger, of Old Dominion University, discovering and mapping caves in southwestern VA. From 1968-1990 he took monthly trips to New Paris, PA in support of a Pleistocene bone project with Carnegie Museum of Natural History (Pittsburgh, PA). He organized the Southern Appalachian Geological Association in the Tri-State area for students, professors and anyone interested in geology, and led geology hikes at area parks. Robert was a Life member & Fellow of the National Speleological Society, served in officer capacity in the VPI Grotto, the Holston Valley Grotto, as well as for the Virginia Region of the NSS. In each organizations, he published their newsletter. He was Director of the Robertson Association Old Timers Reunion for 3 years, and planned field trips for the 1971 NSS Convention in Blacksburg, VA. He was on the Board of Directors, 1992-2008 of the Museum of the Middle Appalachians in Saltville VA, President of Friends of Roan Mountain 2000-2008, Corporate Rep for General Shale of the Boone Watershed Partnership. He held memberships with American Institute of Professional Geologists, Kentucky Society of Professional Geologists, Geological Society of America, the Tennessee Cave Survey, and earned Professional Geologist licenses in Tennessee, Kentucky, Indiana, Arkansas, Pennsylvania, Virginia, North Carolina, Georgia and Alabama. He was invited twice to a Brick Conference in Cartagena, Colombia to speak concerning his innovative mining methods and stockpiling of clay for General Shale Brick. During this time, he coached Park & Rec soccer for his son's school teams as well as the 1975 Falcons Traveling Soccer Team for 8 years. He always told the boys, “You are soccer players today, but you will be gentlemen for the rest of your lives. Act on it!” He gave “Rock Talks” to area schools, at Wilderness Wildlife Week in Pigeon Forge, to any group who asked, delighting listeners by eating a rock and finishing with a fluorescent light show. In 1978 he traveled to Mexico to drop two deep pits, but was only able to start down one when the sheath of the rope he was on separated at 100 feet down the 1000-foot pit. With help from above, he “self-rescued” on the rope tail, and climbed to the surface. Two years later he returned to drop into El Sotano, a 1300-foot pit. Retiring from General Shale, he joined the Writers Circle at Johnson City Senior Center, writing poems, short stories and one of a 5-volume series, titled The Rosetta Stitch (available on Amazon). Travel to Hawaii and Alaska furthered a personal quest to see and explore all 50 States. Robert was a member of Cornerstone Church where he served as an usher for many years. He is preceded in death by his parents Opal Bowman and Charles V Whittemore, his stepmother Michelle McCranie, his oldest sister Claudette Whittemore Bodnar, and his son David T Whittemore. Survivors include his wife of fifty-five years, Anne B Whittemore, daughter Carolyn (Shane Sandidge), two brothers Dr Barry T Whittemore and Walter Whittemore, and one sister Rebecca W Zur (Kevin), two unique grandchildren, as well as several nieces and nephews. The family of Robert E Whittemore will receive friends from 11:30 am to 12:45 pm followed by a Celebration of Life service at 1:00 pm on March 5, 2022, at Cornerstone Church in Johnson City. The family requests memorial contributions be made to Parkinson's Foundation, PO Box 6003, Albert Lea MN 56007-6603.

The family of Robert E. Whittemore created this Life Tributes page to make it easy to share your memories.

Send flowers to the Whittemore family.