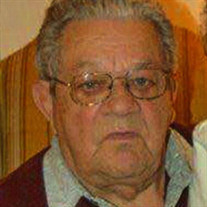 Robert F. “Frank” Sliger, 90, of Johnson City, passed away Saturday, June 12, 2021, at Lakebridge Nursing Home, due to complications from a fall. Robert was born in Washington Co. Tn. and was a lifelong resident of Johnson City. He was the son of the late Enoch and Amanda Dunn Sliger. Robert graduated from Lamar Hill High School where he was on the basketball team. He graduated from Steed Business College in 1958. Robert served in the U.S. Navy and Marines from 1953-56. Robert worked for the Johnson City Housing Authority for over 30 years and served as Executive Director for 25 years. He was a member of the Johnson City Rotary Club. In addition to his parents, Robert was preceded in death by his wife of sixty years, Dorothy Couch Sliger, five sisters; Leitha Simpson, Mary Lloyd, Virginia Greenwell, Roxie Lowe and one brother, Bill Sliger. After Robert retired, his favorite past time was going to Tunica, Cherokee or Atlantic City to play the slots with Dorothy and Paul and Ann Adams and friends. He loved spending time with his family especially his three granddaughters. He had a passion for watching westerns later in life. Survivors include two sons; David and his wife Carolyn (Rookie) Sliger, (granddaughter) Malissa Sliger; Larry and wife Michele; granddaughters; Reid Sliger and McKinley Sliger, several nieces and nephews and one sister, Nora Ezelle. The family would like to thank the health care heroes at Pine Oaks Assisted Living and Lakebridge Nursing Facility for their love and care for Robert. Yes, we knew he was a handful but we all loved him dearly. In lieu of flowers, memorial contributions may be made to the Holston Home for Children, 404 Holston Drive, Greeneville, TN 37743 or Washington County Animal Shelter, 3411 North Roan Street, Johnson City, TN 37601. The family of Robert Sliger will receive friends from 9:30 to 10:30 am, Friday, June 18th, 2021, in the Tetrick Funeral Services Chapel. A graveside committal service will follow in the Mountain Home National Cemetery with Rev. Aaron Atchley officiating. Active pallbearers will be selected from family and friends. The Johnson City VFW Post # 2108 will accord military honors. Memories and condolences may be shared at www.tetrickfuneralhome.com. Tetrick Funeral Services, 3001 Peoples Street, Johnson City, TN 37604, (423) 610-7171, is honored to serve the Sliger family during this difficult time.

Robert F. &#8220;Frank&#8221; Sliger, 90, of Johnson City, passed away Saturday, June 12, 2021, at Lakebridge Nursing Home, due to complications from a fall. Robert was born in Washington Co. Tn. and was a lifelong resident of Johnson City.... View Obituary & Service Information

The family of Robert F Sliger created this Life Tributes page to make it easy to share your memories.

Send flowers to the Sliger family.