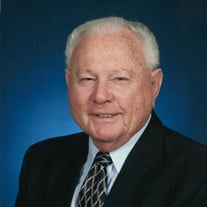 Reverend William J. Carter died March 8, 2022, at NHC Healthcare of Johnson City. Bill was born on June 27, 1928, at the family home on the banks of the Clinch River in the Slant community of Scott County, Virginia. Bill was predeceased by his parents Emmett Arlington and Orpha Louise Sturgill Carter; wife Belle Lee Carter; sister, Katie; brother, Danny, and son Michael Lee Carter. He is survived by his brother, Jimmy Carter (Anne); cousin Ed Carter, and honorary grandchildren, Emory Kate and Sam Brengle. At a young age, Bill moved to Idaho with his family to work on Uncle Bill’s dairy farm. After several years, the family returned home and Bill completed high school at Dungannon where he was valedictorian of his class. He continued his education at Hiwassee College (AA), where he met the love of his life, Belle, to whom he was married 63 years. He earned a BA degree at Emory & Henry College, and later E&H awarded him a Doctor of Divinity degree, honoris causa. He had a truly wonderful experience at Emory & Henry, where he was encouraged to expand his writing skills by Professor Blaise. This led to his wish to bequeath his estate to E&H; his final resting place will be on the campus, along with Belle and Mike. His legacy at E&H will live on forever as he had a residence hall named after him in recognition of his generous philanthropic support. Bill earned a BD from Vanderbilt School of Religion where he was awarded the Founder’s Medal for having the highest scholastic average achieved by any student in the School of Religion. He rounded out his education with an MA Degree in Counseling from the University of Tennessee. Bill dedicated his life to the Methodist Church and the Holston Conference, with forty years of active service. He pastored churches in Virginia including Norton- West Norton, Rose Hill, Wise, and Tazewell – Main Street. Churches in Tennessee include Elizabethton – First, Knoxville – Bearden, and Chattanooga – Brainerd. He served in many capacities, some being Abingdon District Superintendent, Specialist in Leadership Development, Lay, Clergy, and Director of Conference Council on Ministries, before his retirement in 1990. After retirement, he made Johnson City his home and joined the First United Methodist Church family. He later stepped up to pastor the church during a time of transition. The church has a prayer chapel dedicated in his name. Bill loved to travel and was an avid photographer of waterfalls. He made numerous trips with his friend, Don Gentry. For many years you could find Bill on the tennis court playing weekly with a great group of friends. He loved his tennis buddies, and they hated his back spin and short shots. When Bill wasn’t on the courts, you could find him enjoying a good meal with friends, reading, or working on his next presentation or on his literary works. He authored several books that are still in print and numerous adult Bible studies for the United Methodist Church. Bill never met a stranger and was a natural leader. He was a kind person who had a great sense of humor and found enjoyment in every moment of life. He was amazing with children who were instantly drawn to him. He always managed to include Slant, Virginia in any sermon, presentation, or in conversation with anyone who would listen! He will be missed on this earth. A celebration of life will be held at First United Methodist Church, Johnson City, led by Pastor Jodi Ifhe, on March 20, 2022. Visitation will be at 3:00 pm, and the service will follow at 4:00 pm. At Bill’s request, colleagues and friends: Reverend James Whedbee, Reverend Gordon Ridenhour, Don Gentry, Donna Wilkinson, and brother Jim Carter will share remembrances. A special thanks to NHC and their staff for the loving care provided to Bill, along with Caris Hospice, Donna Wilkinson for being an advocate for his care during his later years, and many friends at FUMC for their support. Monetary contributions can be made to First United Methodist Church, and/or Brother’s Keeper – www.BrothersKeeperTN.org/Donate.

Reverend William J. Carter died March 8, 2022, at NHC Healthcare of Johnson City. Bill was born on June 27, 1928, at the family home on the banks of the Clinch River in the Slant community of Scott County, Virginia. Bill was predeceased by... View Obituary & Service Information

The family of Reverend William J. Carter created this Life Tributes page to make it easy to share your memories.

Send flowers to the Carter family.