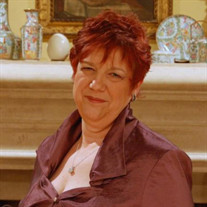 Mrs. Regina L. Street, 71, of Johnson City, passed away Sunday, November 28, 2021, after a brief illness. “Jeannie” was born on her older sister’s 5th birthday in 1950 in Lenoir City, TN. She was the youngest of four Loveday children. After finishing high school, Jeannie moved to Johnson City and put herself through school at East Tennessee State University. Jeannie’s sister, Dallas, set her up on a blind date at Pizza Hut with Roy L. Street, a sergeant in the Army, who was on leave from one of his several tours in Vietnam. After a brief, whirlwind courtship, the two were married in August 1974. Jeannie’s social services career included work at organizations such as Early Childhood Development in Johnson County, the Salvation Army and the Department of Human Services, where she retired early to take care of her husband while he battled his first round of cancer. Together, Jeannie and Roy had two children, Rebecca and Robert. The family resided in Johnson City until 1994 when they built a small cabin in Flagpond, TN to get away from “city life”. Soon after, her brother, Tom, relocated his family from Texas to Flagpond to be closer to his baby sister. These were the best years of Jeannie’s life. Filled with peaceful mornings drinking coffee on the front porch, competitive card games with her siblings, and visits from family and friends, there was no other place she would rather be. Jeannie loved talking about politics and her faith, playing with her five grandkids, cheesecake, Italian crème cake, black coffee, prime rib, springtime, rocking in a rocking chair, jewelry, listening to her daughter play piano, talking to her son about guns, playing card games, her Sunday School class, action movies, and studying scripture. Quite the character, Jeannie’s good hearted antics will provide her family and friends with hilarious memories that will sustain them through her loss. Jeannie was a devout Christian woman who was the epitome of someone with a servant heart. In the early 1990’s, she started a women’s prison ministry in Unicoi County that led many women to Christ. Jeannie, along with a few friends and family members also provided an Easter meal for all the inmates and staff at the Unicoi County Jail for nearly 15 years. She was an active member, volunteer and leader in her church, Calvary Baptist in Erwin, TN. She lived the charge found in the Bible verse James 1:27 and looked after widows, orphans and others in distress and challenged everyone around her to do the same. Jeannie is preceded in death by the love of her life, Roy, and her parents, Dallard Loveday and Bernice Joy Queener Loveday. She is survived by her children, Rebecca White and Robert Street and his wife Jennifer; grandchildren, Hayden, Jackson, Layton, Riley and Ryder; brother, Tom Loveday and his wife Jean; sister, Dallas Adams and her husband Griffin; many nieces and nephews, and members of Roy’s family. The family of Regina L. Street will receive friends from 5 to 6 pm Monday, December 27, 2021, at Tetrick Funeral Services in Johnson City. The funeral service will follow at 6 pm with Pastor Jeremy Dykes officiating. The graveside committal service will be conducted at 1 pm Tuesday, December 28, 2021, in the Mountain Home National Cemetery new annex. Minister, family and friends are requested to meet at the cemetery by 12:50 pm Tuesday. The family requests in lieu of flowers, donations be made to two charities that Jeannie loved and supported: Samaritan’s Purse or Voice of the Martyrs. Memories and condolences may be shared at www.tetrickfuneralhome.com. Tetrick Funeral Services, 3001 Peoples Street, Johnson City, TN 37604 (423 610-7171) is honored to serve the Street family.

The family of Regina Street created this Life Tributes page to make it easy to share your memories.