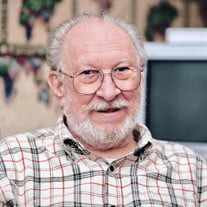 Raymond Earl Straile, age 92 of Johnson City, Tennessee, passed away on Tuesday, October 26, 2021 in the Princeton Transitional Care in Johnson City. Ray was born at Rochester General Hospital, Rochester, PA on August 1, 1929. He and his parents lived on Adams Street in Rochester. He was baptized at the Grace Evangelical Lutheran Church, Rochester, PA on September 1929. Ray grew up in New Brighton, PA, graduating from New Brighton High School a member of the class of 1948. He enlisted in the Army immediately after finishing high school serving four years in the Army Security service Agency: attended signal schools at Fort Monmouth, NJ and Carlisle Barracks, Carlisle, PA. He then served two years at Helemano Station 8605th AAU on the island of Oahu, then a territory of the United States. He was honorably discharged at Indian Town Gap Military Reservation on June 7, 1952 with the rank of Staff Sargent. He matriculated at Geneva College, Beaver Falls, PA, majoring in chemistry and physics and graduated in 1956. Ray and Dolores Marie Kraemer, the daughter of Francis X and Theresa Anne Kraemer, of Southside, Pittsburgh, PA were united in marriage on December 20, 1958 at the Grace Lutheran Church in New Brighton by, then pastor, James Frank. Dolores had two sons, Richard R. and Todd J. Becka by a previous marriage. They lived in Zelienople, PA where Ray was employed at the Callery Chemical Co in Callery, PA and subsequently moved to Madison, NJ where he was employed by the Bell Telephone Laboratories the research arm of AT&T at Murray Hill, NJ. He moved his family to New Providence, NJ to be closer to work and retired after 30 years with the company. After retirement he moved to Blandon, PA and lived there for 18 years, subsequently moving to Johnson City, TN where he lived until his death. He was preceded in death by his wife Dolores Straile; his father, George A. Straile of Freedom, PA and his mother Christene (Krimbelbine) Straile of Conway, PA and two brothers-in-law, Timothy Kelly and William Cabana. He is survived by his sons, Rick Becka and wife Kay and Todd Becka; two sisters, Christene Kelly from Burgettstown, PA and Eleanor Cabana from New Brighton, PA. He also survived by several nieces and nephews. Graveside services with military honors were held in the Mountain Home National Cemetery in Mountain Home, Tennessee on Friday, October 29, 2021.

Raymond Earl Straile, age 92 of Johnson City, Tennessee, passed away on Tuesday, October 26, 2021 in the Princeton Transitional Care in Johnson City. Ray was born at Rochester General Hospital, Rochester, PA on August 1, 1929. He and his... View Obituary & Service Information

The family of Raymond Earl Straile created this Life Tributes page to make it easy to share your memories.

Send flowers to the Straile family.