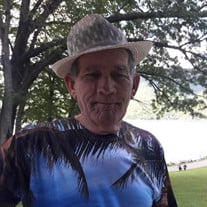 Raymond Paul Miller, age 84, of Johnson City, Tennessee, passed away on January 8th, 2022 in Elizabethton, Tennessee. Raymond was born in Elk Park, North Carolina to the late Robert Miller and Myrtle Williams Millers. In addition to his parents, he is preceded in death by his wife, Linda Faye Oliver Miller, two brothers, John Miller and Jerry Miller as well as three sisters, Alma McNabb, Phyllis Roop, and Janice Miller. Raymond was a good man who enjoyed spending time with his family and fishing. Raymond served in the National Guard for six years. He attended Keystone Baptist Church. Those left to cherish his memory include his son, James Ray Miller, his two daughters, Tami Miller Jones, and Brenda Wyatt, brothers, Bobby Miller and Frank Miller, sisters, Margret Manning, Norma Campbell, Carolyn Sue Barnett and Sandra Berry. Many several grandchildren and great-grandchildren also survive. The family would also like to extend a special thanks to Nurse Michelle at Amedisys Hospice. A service to honor the life of Raymond Miller will be announced at a later date from the family. Words of comfort can be sent to the family through our website, www.tetrickfuneralhome.com. Tetrick Funeral Home-Riverside Chapel, 211 North Riverside, Elizabethton, TN 37643 (423) 542-2232 is honored to serve the Miller family.

The family of Raymond Paul Miller created this Life Tributes page to make it easy to share your memories.

Send flowers to the Miller family.