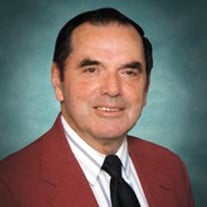 Click here to view a livestream of Mr. Trent's Funeral Service. Randall Trent, 86, Jonesborough went to his heavenly home on Sunday, March 6, 2022. Randall was born on November 4, 1935 in Sneedville, TN to the late Herman and Laura Trent. After high school Randall joined the Army and was stationed in Korea. He was proud of his service and often talked about his experiences while serving. After his military service, Randall attended East Tennessee State College (now ETSU). He graduated with a BS degree in Business in 1960. After graduating college, he married his sweetheart Bernice Nelson and they moved to Maryland for a brief period where Randall was a shop teacher. They returned to Jonesborough and he worked at Holston Defense until retirement while Bernice became a full time mom and homemaker. Randall always enjoyed farming and was usually found tinkering with something in his spare time. He also loved spending time with his grandchildren which were the pride of his life. Randall was a member of Trinity Baptist Church in Jonesborough. He enjoyed the time he had with his fellow church members and especially his Sunday school class. In addition to his parents, Randall was preceded in death by: his wife of 62 years, Bernice Trent; his sister Sharon Jenkins and his nephew Captain Robert Jenkins, USMC. He is survived by his sons Richard and wife, Missy and Nathan and wife, Melodie; grandsons Jayce, Mason and wife, Janel, Chance and granddaughter Hannah; sister, Charlene Trent-Lewis; nephews Ron Jenkins and Curt Lewis; nieces Debbie McInturff, Sherry Graham, Jenni Treadwell, Christie Whiting and Kim Adkins; and special friend Betty Lawson. The family will receive friends on Thursday, March 10, 2022 from 5 to 7 PM at Tetrick Funeral Services. Funeral will follow at 7 PM, with Pastor Mark Harrod presiding. Graveside services will be on Friday, March 11, 2022 at 10 AM at Washington County Memory Gardens. Pallbearers will be grandsons, Ron Jenkins, Ward Hyleman and Norm Davis. In lieu of flowers, please make memorial donations to Trinity Baptist Church, 260 Headtown Rd, Jonesborough, TN 37659.

The family of Randall Trent created this Life Tributes page to make it easy to share your memories.

Send flowers to the Trent family.