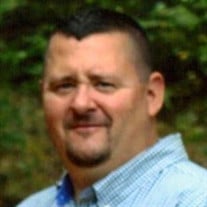 Mr. Randall “Randy” Wayne Hyatt, 52, of Piney Flats, passed away on Monday, April 11, 2022, at the Johnson City Medical Center after a courageous battle with cancer. Randy was the son of Billy Hyatt and the late Shirley Dowell Hyatt of Bristol, Tennessee. Randy was a graduate of Tennessee High School where he was an outstanding baseball player. He graduated from ITT Technical Institute in 2012 with an Associate’s Degree in Computer Science. He also had previously owned and operated R & M Lawn Care. He currently was employed at East Tennessee Rentals where he had developed many wonderful relationships with both coworkers and customers. Randy’s greatest passion in life was to serve the Lord. He was baptized into Christ in 2002 at Bunker Hill Christian Church. He had filled in as minister at various Christian Churches in Tennessee and Virginia. He was a dedicated Christian and spent the last years of his life working at Brick Christian Church in Watauga, Tennessee. There he served as an elder, fill-in Sunday School teacher, and spent many hours editing sermons for the Brick Christian Church radio program that aired on WBEJ. He loved discussing the Bible with special friends Buddy Carrier (fellow elder) and Ernie Depew (Minister.) Randy was an avid hunter and enjoyed spending time hunting with his friend and brother-in-Christ Wiley Morgan. He was a big Vols fan and loved watching football with his son Samuel. Randy was a very talented man and was meticulous in every project he undertook. He is survived by his wife and love of his life Marla, one son Samuel of the home, two daughters Whitley Hyatt of Bristol, and Rachel Booher also of Bristol. Randy had two grandsons, Isaac and Linkin. He leaves behind a sister, Becky Thomas (David) and a brother Billy Wade Hyatt all of Bristol. He is survived by several nieces and two special nephews, Tyler Thomas (Laura) and Tanner Thomas. He is also survived by his mother-in-law Lynnette Poe of Johnson City, father-in-law Kyle Moore (Connie) of Limestone, one sister-in-law Lauren Poe of Johnson City, two brothers-in-law Ben Moore (Heather) of Johnson City and Logan Moore of Limestone. The family of Randy Hyatt will receive friends from 6 to 8 PM Friday, April 15, 2022, at Tetrick Funeral Services. The funeral service will follow at 8 PM with Ministers Ernie Depew, Ben Moore, and Bret Jones officiating. Special music will be provided by Lauren Poe. The graveside committal service will be conducted at 11 AM Saturday, in the Glenwood Cemetery, Bristol, Tennessee. Active pallbearers will be Billy Wade Hyatt, David Thomas, Tyler Thomas, Tanner Thomas, Wiley Morgan, Ben Moore, Jacob Jones, and Logan Moore. Honorary pallbearers will be the Elders of Brick Christian Church, special friend Nate Buck, and employees of East Tennessee Rentals. Ministers, family, and friends are requested to meet at the cemetery by 10:50 AM Saturday.

Mr. Randall &#8220;Randy&#8221; Wayne Hyatt, 52, of Piney Flats, passed away on Monday, April 11, 2022, at the Johnson City Medical Center after a courageous battle with cancer. Randy was the son of Billy Hyatt and the late Shirley Dowell Hyatt... View Obituary & Service Information

The family of Randall "Randy" Wayne Hyatt created this Life Tributes page to make it easy to share your memories.

Send flowers to the Hyatt family.