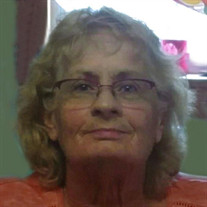 Phyllis Ann Odom, age 69, of Elizabethton, passed away on April 10, 2021 at the Johnson City Medical Center. She was the daughter of the late Herman and Christine Scalf Hill and was born in Telford, TN on May 30, 1951. In addition to her parents, she was preceded in death by a sister, Debbie Norris and her brother, Terry Hill. Phyllis was a retired CNT and enjoyed taking care of others. She loved animals, working in her flowers and going to yard sales. Those left to cherish her memories are her three children, Michelle White (Harold) of Watauga, Melvin Simmons (Becky) of Elizabethton, and Daniel Simmons of Elizabethton; four grandchildren, Kelsey Simmons of Christiansburg, VA, Kristopher Simmons and Michael Simmons both of Elizabethton and Joshua White of Watauga; two brothers, Wayne Hill (Rose) and Ronnie Hill all of Elizabethton; brothers-in-law and sisters-in-law, Johnny and Sandra Holder, Ralph Simmons, Sandi Simmons, Danny Norris and Ann Hill; several nieces and nephews; and two special friends, Angela Markland and Betty Barnes. Phyllis is also survived by her three cats that she loved very much, “Mattie”, “Shadow”, and “Bailey”. A service to honor the life of Phyllis Ann Odom will be conducted at 7:00 PM, Tuesday, April 13, 2021 at Tetrick Funeral Home, Elizabethton with Pastor Gene Fleenor officiating. The family will receive friends from 5:00 PM until 7:00 PM prior to the funeral service on Tuesday. Friends are also welcome to come by the funeral home after 12:00 PM on Tuesday to pay their respects and sign the guest book. The graveside service and interment will be conducted at 10:00 AM on Wednesday, April 14, 2021 at Patton Simmons Cemetery with Pastor Mark Simmons officiating. Active pallbearers will be Michael Simmons, Christopher Simmons, Joshua White, David Holder, Brad Perkins, Brent Blackwell, Steve Yancey and Robert Barnes. Honorary pallbearers will be Jeremy Lunsford and Ervin Bare. Everyone will meet at Tetrick Funeral Home of Elizabethton at 9:15 AM on Wednesday to go in procession to the cemetery. Those who prefer memorials in lieu of flowers may make donations to the Carter County Humane Society, PO Box 134, Elizabethton, TN, 37644.

Phyllis Ann Odom, age 69, of Elizabethton, passed away on April 10, 2021 at the Johnson City Medical Center. She was the daughter of the late Herman and Christine Scalf Hill and was born in Telford, TN on May 30, 1951. In addition to her parents,... View Obituary & Service Information

The family of Phyllis Ann Odom created this Life Tributes page to make it easy to share your memories.

Phyllis Ann Odom, age 69, of Elizabethton, passed away on April...

Send flowers to the Odom family.