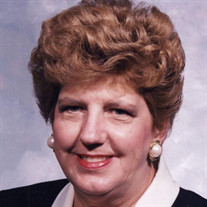 Peggy Ann Hughes, age 90, of Johnson City, Tennessee went home to be with her Lord on Monday, October 4, 2021 at the Ivy Hall Nursing Home in Elizabethton surrounded by her loving family. Peggy was born in Elizabethton to the late Henry Eugene Nave and Hattie Mae Gouge Nave. In addition to her parents, Peggy was also preceded in death by her husband, Robert William “Bill” Hughes; her sister, Hildred LaPorte; and two brothers, Leslie H. Nave and Harry K. Nave. Peggy had worked at Massengills of Johnson City and was a member of First Christian Church of Johnson City. She was a former member of the Johnson City Women’s Club, a former member of the Tuesday Bridge Club and was called to substitute for many differed bridge groups. Peggy loved to play bridge and did so well into her late 80s (almost 90) and was considered to be a very good player! She also enjoyed UT football games with her husband in their UT van, sewing in her younger years and Gatlinburg trips with her husband. Those left behind to love and cherish Peggy’s memory include her daughter, Patricia Ann Meyers and husband Gary of Kentucky; her son, Robert Hughes and wife Donna of Johnson City, TN; her grandchildren, Billy Meyers and wife Alynia of Kentucky, Tony Hughes and wife Amanda of Georgia, and Tiffany Willis of Johnson City; five great grandchildren; her sister-in-law, Carolyn Nagle of North Carolina; and several nieces and nephews. Also surviving is her daughter, Melinda Templeton and husband Scott of Piney Flats, TN and grandchildren, Lauren Kozik and husband Ray of South Carolina and Candice Templeton of Tennessee. A graveside service to remember the life of Peggy Ann Hughes will be conducted at 3:00 PM on Thursday, October 7, 2021 at Happy Valley Memorial Park with Mr. Donald Mushayamunda, minister, officiating. Music will be provided by Mike Imboden. Active pallbearers will be selected from family and friends. Those wishing to attend the graveside service are asked to meet at 2:15 PM at Tetrick Funeral Home, Elizabethton on Thursday to go in procession to the cemetery. Those who prefer memorials in lieu of flowers may make donations to St. Jude’s Children’s Hospital, 501 St. Jude Place, Memphis, TN 38105 in honor of Peggy Ann Hughes. The family would like to thank her granddaughter, Tiffany Willis for the loving care and devotion shown to her grandmother and also to Judy Deloach and the staff of Ivy Hall Nursing Home for the exceptional care and love shown to Peggy and the family during her illness. Online condolences may be shared with the family on our website, www.tetrickfuneralhome.com, Tetrick Funeral Home, Elizabethton is honored to serve the Hughes family. Office 423-542-2232, service information line, 423-543-4917.

Peggy Ann Hughes, age 90, of Johnson City, Tennessee went home to be with her Lord on Monday, October 4, 2021 at the Ivy Hall Nursing Home in Elizabethton surrounded by her loving family. Peggy was born in Elizabethton to the late Henry Eugene... View Obituary & Service Information

The family of Peggy Ann Hughes created this Life Tributes page to make it easy to share your memories.

Send flowers to the Hughes family.