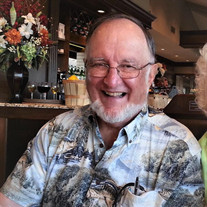 Paul C. Comstock, 84, of Johnson City, TN, passed into his eternal home Monday, August 9, after a period of declining health following a heart attack he suffered in May. Paul was a devoted Christian, husband, father and grandfather who exemplified a true commitment to his faith and family. He will be sorely missed by all those whose lives he touched. Among his many passions were reading and studying his Bible, travelling with his family, fishing, watching UT football and basketball and playing cards, particularly pinochle. He was born March 10, 1937 in Lyons, NY to C. Clayton Comstock and Iva Conley Comstock, both of whom preceded him in death. He graduated from Berea College (KY) with a Bachelor of Arts degree in 1959, and received a Master's degree from the University of Tennessee in social work. He worked for over 50 years in the mental health field, serving primarily as the director of the Charlotte Taylor Center in Elizabethton. He was a longtime member of Mountain View Baptist Church, serving as a deacon, teaching Men's Bible study classes and singing in the choir, which he dearly loved. Among those left behind to treasure their memories of Paul is the love of his life, Emily Tillery Comstock, to whom he was married for over 62 years. Survivors also include the couples' three children, daughter Jeni Crabtree of John's Island, SC and her husband Joe, son Chuck Comstock of Penn Yan, NY and his wife Sarah, and daughter Joy Haga of Johnson City and her husband Jerry. Paul is additionally survived by his brother, Stanley Comstock, also of Penn Yan, NY, and his wife Betsey, two nephews who were very special to him, Mark and Carl Comstock, 12 grandchildren ranging in age from 36 to 2 and two great-grandchildren. The family will be holding a graveside service at noon Saturday, August 14, which will be held at Washington County Memory Gardens, and will be open to all who wish to pay their respects to Paul. Pallbearers will be selected from among Paul's children, grandchildren and many friends. Due to Covid-19 concerns, the family requests that those in attendance please wear a mask and practice social distancing. In lieu of flowers, Paul requested that memorial donations be made to Mountain View Baptist Church, Johnson City.

Paul C. Comstock, 84, of Johnson City, TN, passed into his eternal home Monday, August 9, after a period of declining health following a heart attack he suffered in May. Paul was a devoted Christian, husband, father and grandfather who exemplified... View Obituary & Service Information

The family of Paul C. Comstock created this Life Tributes page to make it easy to share your memories.

Send flowers to the Comstock family.