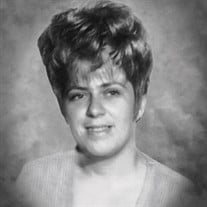 Patsy Mathis Dykes, age 76, of Elizabethton, Tennessee went home to be with her Lord on Thursday, June 24, 2021 at Ivy Hall Nursing Home, following an extended illness. Patsy was a native of Carter County and a daughter of the late Howard Jessie Mathis and Gladys Marie Guess Mathis. In addition to her parents, Patsy was also preceded in death by two brothers, Roger Mathis and Billy Mathis. Patsy had worked for Ivy Hall Nursing Home for ten years as a cook. She was of the Baptist faith and she enjoyed watching old television shows such as Gunsmoke and the Golden Girls and most of all she loved taking care of her family. Those left to cherish Patsy’s many memories include her husband of forty nine years, Richard Dykes, of the home; a son, Christopher Dykes and wife Heather, of Elizabethton; a granddaughter, Paiyton Dykes, of Elizabethton; two brothers, Mickey Mathis and wife Deborah, of Elizabethton and Barry Mathis and wife Kay, also of Elizabethton; two sisters, Brenda Bare and husband Glen, of Elizabethton and Penny Fenner and husband Billy, also of Elizabethton; and a sister-in-law, Sue Mathis, of Elizabethton. Several nieces and nephews also survive. A graveside service to celebrate the life of Patsy Mathis Dykes will be conducted at 1:00 PM on Sunday, June 27, 2021 at Happy Valley Memorial Park with Pastor Darrell Bradshaw, officiating. Active pallbearers will be Travis Magee, Adam Magee, Alex Magee, Scott Bare, Gary Bare, Tim Parlier, Rick Parlier and Brandon Parlier. Those wishing to attend the service are asked to meet at Tetrick Funeral Home, Elizabethton at 12:15 PM on Sunday to go in procession. Those who prefer memorials in lieu of flowers may make donations to the National Kidney Foundation, 30 East 33rd Street, New York, NY 10016 in memory of Patsy Mathis Dykes. The family would like to especially thank the doctors, nurses and staff of Ivy Hall Nursing Home for the love and care shown to Patsy during her illness. Online condolences may be shared with the family on our website, www.tetrickfuneralhome.com Tetrick Funeral Home, Elizabethton is honored to serve the Dykes family. Office 423-542-2232, service information line, 423-543-4917.

Patsy Mathis Dykes, age 76, of Elizabethton, Tennessee went home to be with her Lord on Thursday, June 24, 2021 at Ivy Hall Nursing Home, following an extended illness. Patsy was a native of Carter County and a daughter of the late Howard Jessie... View Obituary & Service Information

The family of Patsy Mathis Dykes created this Life Tributes page to make it easy to share your memories.

Send flowers to the Dykes family.