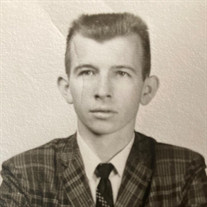 On Monday, February 1, 2021, O’Neal Oscar Glasgow, loving husband, father and grandfather, passed away at the age of 85. O’Neal was born on July 21, 1935 in Stewart County, Tennessee to Wesley and Nova (Tubbs) Glasgow. He received an accounting degree from Andrew Jackson Business College in Nashville, Tennessee, and soon thereafter moved to Johnson City, Tennessee to work as an agent for the Internal Revenue Service. Neal was a member of the Air National Guard and served in active duty in Europe during the Berlin Crisis. In Johnson City, Neal met Betty Jo Davis and they married on April 17, 1965. They raised a son and a daughter, Robert and Cynthia. After retiring from the IRS, Neal studied small engine mechanics and then ran a successful small engine repair business from his home for many years. In his more active days, Neal was an avid outdoorsman. He enjoyed hunting and fishing, often competing in bass fishing tournaments. One of his favorite places on earth was the Land between the Lakes National Recreation Area, which is located close to his birth place and was an important part of his youth. He was a talented woodworker who enjoyed making things for those he loved. In retirement, his interests shifted to reading, gardening, bird watching and genealogy. Neal was an active member of Tri-Cities Church of God for many years. His sly sense of humor will be missed by all who knew him. Neal was preceded in death by his mother Nova, his father Wesley, his sister Agnes Fulton and his sister Naomi Pinkerton. He is survived by his wife, Betty; his son Robert Glasgow and daughter-in-law Shannon (Helton) Glasgow; his daughter Cynthia Glasgow and son-in-law Robert Rhodes; his two grandsons Clyde and O’Neal Glasgow-Rhodes; and several nieces and nephews. Please understand we will be following the State’s COVID-19 guidelines. We ask all guests and family members attending services to please bring and wear a mask, and observe all social distancing guidelines. A graveside service will be conducted at the Mountain Home National Cemetery at 1pm on Monday, February 8, 2021, with Richard Bawgus officiating. The Boone Dam Post #4933 will accord military honors. Minister, family and friends are requested to meet at the cemetery by 12:50 pm Monday.

The family of O'Neal Oscar Glasgow created this Life Tributes page to make it easy to share your memories.

Send flowers to the Glasgow family.