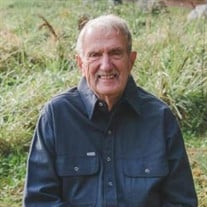 On Tuesday evening, February 1, 2022, at the age of 81, our beloved Norman passed away at his home. Norman Hayes Duncan was born on November 2, 1940 in Oliver Springs, Tennessee to the late Hayes and Alma (Jackson) Duncan. Norman was a member of Edgefield United Methodist Church in Piney Flats, TN. He served in the Army. Norman retired from Winn-Dixie Stores as a maintenance mechanic after 30+ of service. In addition to his parents, he was preceded in death by his sister and brother-in-law, Carol and Doug Qualls; mother-in-law Christa Dison; and sister-in-law Teresa Whetsell. Norman had a passion for woodworking, building and fixing about anything with his hands. There wasn’t much that Norman couldn’t fix or build, including the family’s first home which him and Diana built with their own hands. He loved spending Saturday mornings at the flea market visiting with friends, finding a steal of a deal or buying the grandkids anything they wanted or needed, while drinking his cup of black coffee. He was his family’s biggest cheerleader going to almost every ball game, recital, and play. He loved his family, especially his grandchildren who he would lovingly babysit on most days. Norman leaves a legacy of hard work, beautiful works of woodworking, a servant’s heart, humility, stories for days, but most of all an unconditional love for family. Those left to cherish his memory include his wife of 42 years, Diana (Dison) Duncan, son Chris Duncan (Kristy); daughters Amanda Hollifield (Brooks), Audrey Jarrett (Jason), and Amber Duncan; seven grandchildren Brady Duncan, Grace and Jackson Hollifield, Bailee and Brody Jarrett, and Emersyn and Remington Ebarb. In keeping with his wishes, a small Celebration of Life service will be held at Edgefield United Methodist Church in Piney Flats on Friday, February 4, 2022 at 7:00pm. Family will receive family and friends from 6:00-7:00pm In lieu of flowers, please make donations to Edgefield United Methodist Church, 745 North Pickens Bridge Road, Piney Flats, TN, 37686. The family of Norman Duncan has entrusted his care to Tetrick Funeral Home, 211 North Riverside Drive, Elizabethton, TN, 37643.

On Tuesday evening, February 1, 2022, at the age of 81, our beloved Norman passed away at his home. Norman Hayes Duncan was born on November 2, 1940 in Oliver Springs, Tennessee to the late Hayes and Alma (Jackson) Duncan. Norman was a member... View Obituary & Service Information

The family of Norman Hayes Duncan created this Life Tributes page to make it easy to share your memories.

Send flowers to the Duncan family.