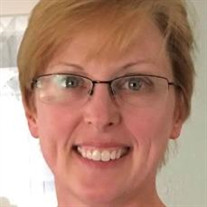 Mrs. Nanci Vasilko, 54, of Johnson City, passed away Sunday, July 25, 2021, peacefully at home after a 3 year long battle with cancer. Nanci was a resident of Johnson City since 1989. She was the daughter of Bill and Patricia Hunt. Nanci was a 1985 graduate of Hobart Sr. High School in Hobart, IN. After graduation she married her high school sweetheart Steve and the couple moved to Texas while he was serving in the Air Force. They moved to Jonesborough in the fall of 1989. She worked at Greene Valley Developmental Center as caregiver until the adoption of their son Joshua in the summer of 1996. After ten years of being a stay at home mom, four of which she home schooled Joshua, she began working receptionist at Roth Neuropsychology from 2008 to 2011. She also began working as office manager at Olson’s Martial Arts from 2009 until six months after her diagnosis in 2018. Nanci loved to quilt, she spent most of her free time hand quilting. She especially enjoyed sewing baby quilts, she got so much joy from giving them to new mothers. She also loved taking vacations to the beach. She and Steve tried to make at least one trip each year, she loved to just sit and listen to the waves. Nanci was a member of St. Elizabeth's Catholic Church in Elizabethton where she and Steve would regularly attend Saturday evening mass. She was preceded in death by her parents Bill and Patricia of Jonesborough. Survivors include her husband of 35 years, Steven J Vasilko; son Joshua S Vasilko; two grandsons, Matthew and Connor Vasilko; one brother, David W Hunt of Naperville, IL; one sister Karen R Slayden of Hebron, IN; one niece, Shannon Davila; three nephews, Justin Slayden, Ryan Hunt and Jordan Hunt; one great niece Shaina Davila; and three great nephews, Jaiden Davila, Brandon Moore and Luther Hunt. Special thanks to Nanci's nurse Vanessa and Amedisys Hospice for the outstanding care given to her during her last few months, and CVS Pharmacy in Boones Creek for their outstanding service. The family of Mrs. Nanci Vasilko will receive friends from 5 to 7 pm Thursday, July 29, 2021, at Tetrick Funeral Services. The funeral service will follow at 7 pm. The graveside committal service will be conducted at 11 am Friday in the Mountain Home National Cemetery. Family and friends are requested to meet at the cemetery’s new annex by 10:50 am Friday.

Mrs. Nanci Vasilko, 54, of Johnson City, passed away Sunday, July 25, 2021, peacefully at home after a 3 year long battle with cancer. Nanci was a resident of Johnson City since 1989. She was the daughter of Bill and Patricia Hunt. Nanci... View Obituary & Service Information

The family of Nanci Vasilko created this Life Tributes page to make it easy to share your memories.

Send flowers to the Vasilko family.