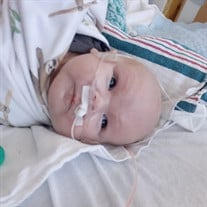 Mordecai Anthony Boyd Mommy's "little grumpy old man" Daddy's "Big Guy" 10/16/21 - 01/12/22 Mordecai was diagnosed in utero with a rare kidney disorder called Autosomal Recessive Polycystic Kidney Disease (ARPKD). On October 16, 2021 he made his appearance six weeks early weighing eight pounds two ounces. His lungs were underdeveloped due to the severity of the ARPKD and his kidneys were oversized and nonfunctioning. He did take his first breaths on his own, and when we heard him cry sounded just like a little puppy. Drs had to then place him on a ventilator to let his lungs develop. At six days old had major surgery to remove his left kidney and place a catheter in his belly for Peritineal Dialysis (PD). He started to progress but the other kidney, barely functioning and severely large, was still just too much on his little body and not giving his lungs room. At three weeks two days old had another surgery to remove his right kidney as well. He then progressed and did very well, despite the ups and downs with PD, and being on a ventilator for six and a half weeks. He made it a long way, and beat many odds, for a baby born with ARPKD as aggressive as his was. After fighting many battles hard and strong, January 12, 2022 this little Warrior, who gave it everything he had, couldn't fight anymore. Preceded in death by: a big sister Josey Boyd and Paternal Grandparents; Vernon and Charlotte Boyd. Survived by: parents; Clyde Boyd and Katheryn (Katie) Hoke; four brothers, Clyde Boyd Jr.,Jace Boyd, Xander Boyd and Kaiden Croteau; one sister, Kimberly Hoke; maternal grandparents, Edward (Tony) DeZarn and Mike and Tammy Hoke- Wallace; aunt, Rachel Boyd Downs; two maternal great grandmother's, Delores Anshutz and Louise DeZarn; several great uncles; great aunts, and cousins. The family of Mordecai Anthony Boyd will receive friends from 3 to 4 pm Sunday, January 30, 2022, at Tetrick Funeral Services. The funeral service will follow at 4 pm with Rev. Mike Anglin officiating.

The family of Mordecai Anthony Boyd created this Life Tributes page to make it easy to share your memories.

Send flowers to the Boyd family.