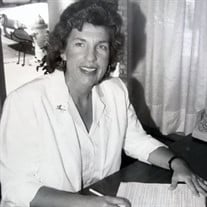 Mollie A. Teilhet, age 72, of Watauga, Tennessee passed away on Wednesday, March 3, 2021 from her residence. Mollie was born in Elizabethton to the late William J. and Cleo Mottern Watkins. In addition to her parents, she was preceded in death by her brother, William J. Watkins, Jr. Mollie was a strong, independent woman with a wonderful spirit of adventure and joy, who loved her children and grandchildren fiercely. Motherhood was her priority and always ensured their care. Mollie had been an agent for the internal Revenue Service for 3 ½ years and for 1 ½ years she was a tax auditor for the Tennessee Department of Revenue Sales Tax Division and was the first female Certified Public Accountant in Elizabethton to have her own business. Her clients were her top priority and that was apparent in her success, having operated her business for 30 successful years. She was a member of the American Institute and the Tennessee Society of CPAs and graduated cum Laude in 1970 from East Tennessee State University with a Bachelor’s Degree in accounting. In addition to her distinguished career, she had also served as an account- auditor for two years with the U.S. General Accounting Office in Washington, D.C. In her leisure time Mollie enjoyed traveling and spending time with her children and grandchildren. Those left to cherish her legacy include two sons, William Teilhet and wife April and John Teilhet and wife Bethany; and her grandchildren, Emma Teilhet, Fisher Teilhet, Eli Teilhet and Elwood Teilhet. No public service is currently scheduled. In lieu of flowers, may make donations to Niswonger Children’s Hospital, 400 North State of Franklin Road, Johnson City, TN 37604 in memory of Mollie Teilhet. The family would like to express a special thank you to Mollie’s cousins` Ruthie Lewis and Janet Ensor for their love, support and care shown to Mollie during her illness. Online condolences may be shared with the family on our website, www.tetrickfuneralhome.com Tetrick Funeral Home, Elizabethton is honored to serve the Mollie Teilhet family. Office 423-542-2232, service information line, 423-543-4917.

Mollie A. Teilhet, age 72, of Watauga, Tennessee passed away on Wednesday, March 3, 2021 from her residence. Mollie was born in Elizabethton to the late William J. and Cleo Mottern Watkins. In addition to her parents, she was preceded in death... View Obituary & Service Information

The family of Mollie A. Teilhet created this Life Tributes page to make it easy to share your memories.

Mollie A. Teilhet, age 72, of Watauga, Tennessee passed away...

Send flowers to the Teilhet family.