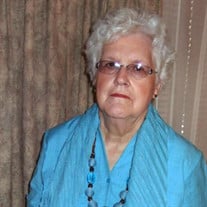 Mary Elizabeth “Betty” Watson, Age 87, parted from the arms of her loving family into the arms of her Heavenly Father on Monday, November 22, 2021, at Johnson City Medical Center Hospital. She was the daughter of the late Robert Wright (Jack) Smalling and Pearl Blevins Smalling and a lifelong resident of Johnson City. Besides her parents she was preceded in death by her husband of 57 years Gerald Watson in 2009, a sister Bobbie Phipps, and a brother Jimmy Smalling. Betty was a seamstress and made clothes for her family including a wedding dress and bridesmaid dresses. She was a loving mother, grandmother, and sister as well as a good friend to many. She was a member of Borderview Christian Church in Elizabethton, TN. She leaves behind to honor and cherish her memory a son and “daughter” Steve and Norma Watson of Johnson City; daughter and caregiver Michele Watson Adkins of Johnson City; daughter Kay Atkins of Cambridge, England; and a special stepdaughter Delores Patterson of Jonesborough, TN.; two grandsons Zac and Steven Atkins of England; three sisters Pat Webb of Jonesborough, TN., Pam King and Margaret Britt of Johnson City; two brothers Jack and Wayne Smalling of Johnson City; special cousin Sue Oler who was considered a sister, five step grandchildren Rhonda Yates; Joy Smith; Chuck, Roger, and Willie Patterson; several nieces and nephews, and special friends Chuck and Hazel Barber. What gave Betty the most joy was being a stay at home mom in her children’s formative years. She was so proud of them for who they are, their work ethic, and their integrity. The family of Mary Elizabeth Watson will receive friends from 2 to 4 pm Sunday, November 28, 2021, at Tetrick Funeral Services. The funeral service will be conducted Monday, November 29, 2021, at 1 pm at Tetrick Funeral Services with Brother Scott Fisher officiating. The graveside committal service will follow in the Roselawn Memorial Park. Active pallbearers will be Jody Crowe, Joel Norris, Scott Reynolds and Chris Timmons. Honorary pallbearers will be Jack Smalling, Wayne Smalling, Randy France, David King, Phil Oler and Randy Webb. It is Betty’s wish that in lieu of flowers, donations be made to Borderview Christian Church Special Fund, 1338 Bristol Hwy., Elizabethton, TN. 37643 or to your favorite charity.

Mary Elizabeth &#8220;Betty&#8221; Watson, Age 87, parted from the arms of her loving family into the arms of her Heavenly Father on Monday, November 22, 2021, at Johnson City Medical Center Hospital. She was the daughter of the late Robert... View Obituary & Service Information

The family of Mary Elizabeth "Betty" Watson created this Life Tributes page to make it easy to share your memories.

Mary Elizabeth “Betty” Watson, Age 87, parted from the arms of...

Send flowers to the Watson family.