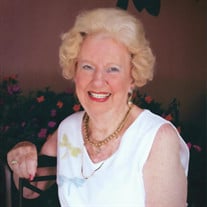 MARY RUTH FINK (MOTHER FINK) of Johnson City passed away peacefully on Thursday, January 28, 2021, at The Waters. Mary was born in Danville, Virginia on August 15, 1921. She was the daughter of the late L. M. and Madge Rose Vaughan. In addition to her parents, she was preceded in death in 1991, by her husband of 49 years, Charles Scott Fink, Jr.; two brothers, Joseph B. Vaughan and Robert Vaughan; sister-in-law, Bonnie Vaughan; and one nephew, Joey Vaughan. Those left to cherish her memory include her daughter, Ginger Falkenstein; two grandchildren, Ashley Powell (Rob) and Robert Falkenstein III (Kellie); six great-grandchildren, Taylor and Shelby Powell and Ethan, Peyton, Karson, and Connor Falkenstein as well as special friends, Eula Seehorn, Billie Conley, Madlyn Lewis and Jean Edwards. After working at Johnson City Foundry and Machine Works for 31 years, Mary retired as personal secretary to May Ross McDowell and as Secretary of the Company. She was a member of Otterbein United Methodist Church. She was also a member of John Sevier-Sarah Hawkins Chapter of DAR, Monday Club Auxiliary, and Business and Professional Women’s Club. Mary was a Charter Member of the Women’s Division of the Johnson City Chamber of Commerce. She was a past member of the Oak Park Garden Club, Sister Cities International, National Federation of Republican Women, Washington County Republican Executive Committee, DOES – Elk Lodge 825, and Epsilon Sigma Sorority. Mary loved to travel and attend dances. She loved clothes and modeled for many stores in Johnson City and Kingsport. In 1960, she was named Best Dressed Secretary in Johnson City. In 1968, she was named one of the 10 Best Dressed Women in Johnson City, and in 1971, Mary was listed in Who’s Who in Community Leaders of America. The family would also like to send a sincere thank-you to Dr. Frank Johnson and to special nurses, Brittani and Michelle from Amedisys Home Health Care and Amedisys Hospice. A Graveside Service for Mary Ruth Fink will be conducted on Wednesday, February 3, 2021 at 2:00 P.M. at Monte Vista Memorial Park. Those wishing to attend are asked to meet at the cemetery no later than 1:50 P.M. Officiating the service will be Reverend Paul Longmire. Honorary Pallbearers will be Robert Falkenstein III, Rob Powell, Gary Speer, Gary Conley, John Harris, and Pete Lonon. In lieu of flowers, memorial donations may be made to Otterbein United Methodist Church; 120 E. Chilhowie Ave.; Johnson City, TN 37601. Memories and condolences may be shared at www.tetrickfuneralhome.com Tetrick Funeral Services, 3001 Peoples Street, Johnson City, TN 37604. (423) 610-7171, is honored to serve the family of Mary Ruth Fink.

MARY RUTH FINK (MOTHER FINK) of Johnson City passed away peacefully on Thursday, January 28, 2021, at The Waters. Mary was born in Danville, Virginia on August 15, 1921. She was the daughter of the late L. M. and Madge Rose Vaughan. In addition... View Obituary & Service Information

The family of Mary Ruth Fink (Mother Fink) created this Life Tributes page to make it easy to share your memories.

Send flowers to the Fink family.