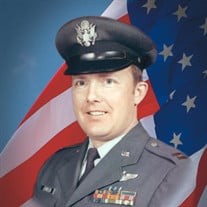 Major Richard "Dick" Johnson, (Ret. USAF), age 79, of Elizabethton, TN went home to join his loving wife, Marion Patricia Davis Johnson, on Friday, October 26, 2018. He was born in Rockport, MA and was a son of the late William W. and Muriel McCarthy Johnson. Dick graduated from Rockport HS in 1956. Then he attended Lowell Technological Institute for two years. In his sophomore year, he was accepted to the Air Force Academy. Dick graduated from the USAFA in 1962. He was assigned to Vietnam in March, 1969 and proudly served his country as a Forward Air Controller. After returning to the states, Dick was stationed at Kincheloe AFB, MI flying KC-135's. He had numerous assignments within the US. Before retiring from the USAF in 1983, Dick obtained a Master’s Degree in Aviation from Embry-Riddle Aeronautical University. For the next 17 years, Dick was the assistant airport manager for airside operations at the Fort Lauderdale-Hollywood International Airport. He retired in 2001. The following year Dick and Marion moved to Elizabethton, TN where they spent many nights outside watching the deer roam their backyard. Those left to honor his memory include his daughters, Roxann Garvin (Christian), grandsons Conor and Brendan of Round Rock, TX; Diana Abel (Bill), granddaughters Ashley and Alana of Coral Springs, FL; a brother, Lawrence W. Johnson, Valley, AL; a sister, Mari Mack, New Port Richey, FL; and several nieces and nephews. Dick will be buried at the United States Air Force Academy Cemetery in Colorado Springs, Colorado at 1:00 PM on Friday, November 9, 2018 with full military honors. Those who prefer memorials in lieu of flowers, may make donations to the Wounded Warrior Project, P.O. Box 758516, Topeka, KS 66675-8516 or by going online to https://support.woundedwarriorproject.org Online condolences may be shared with the family on our website, www.tetrickfuneralhome.com Mr. Johnson and his family are being assisted by Tetrick Funeral Home, Elizabethton. Office, 423-542-2232, service information line, 423-543-4917.

The family of Major Richard "Dick" Johnson (Ret. USAF) created this Life Tributes page to make it easy to share your memories.