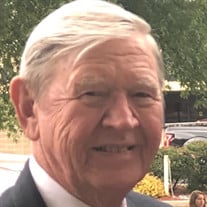 LTC (Ret) Robert Randolph Parks, age 83 of Johnson City, passed away peacefully on Thursday, January 6, 2022 at his home. He was a son of the late Charlie and Anna Fugate Parks, born to them on June 22, 1938 in Nickelsville, Virginia. He united in marriage to Phyllis Combs Parks, in 1959 and to this union, two loving daughters were born. Bob proudly served his country in the United States Army, where he served for over 25 years as a helicopter pilot. He served multiple combat tours, two in Vietnam and one in Korea. Bob obtained many awards and recognitions during his time in the United States Army. Some of these include the Bronze Star Medal, Purple Heart, Meritorious Service Medal, Air Medal, Army Commendation Medal, National Defense Service Medal, Vietnam Service Medal, Army Service Ribbon, Overseas Service Ribbon, Vietnam Campaign Medal, Parachute Badge, as well as the Master Aviator Badge. Along with his highly decorated military career, he also obtained his Bachelor of Science degree from East Tennessee State University in 1962, after which he obtained his Master’s in Business Administration in 1974. After retiring from the military, Bob served in many different roles including Director of the Rural Area Development Association, served as a board member for Mountain Empire Community College, was a former president and charter member of the Scott County Rotary Club where he also was a Paul Harris fellow, three separate times. He was a trustee of the Gate City United Methodist Church. Aside from his many accomplishments, Bob had a love for the country, farming, repairing anything that needed repaired, but most of all, he truly loved his dear wife of 63 years, Phyllis, his daughters and his grandchildren. Along with his parents, Bob is preceded in death by his brothers, Zane Parks and Bill Parks; his sisters, Georgia Parks Cox and Margaret Parks Cornett. Robert is survived by his loving wife, Phyllis Combs Parks; his daughters and sons-in-law, Robin Poget (Philippe), and Jennifer Hopkins (Mike); his grandchildren; Dr. Allison Poget, Stephanie Poget and Aidan Hopkins. He is also survived by many special nieces, nephews, family and friends left behind to cherish his memory. A graveside service to honor the life of LTC (Ret) Robert R. Parks, will be held on Tuesday, January 11, 2022 at 2:00 P.M. in the Mountain Home National Cemetery with Gordon McBride officiating. Those wishing to attend are asked to meet at the cemetery no later than 1:50 P.M. In lieu of flowers, please send donations to Gate City United Methodist Church or the American Cancer Society.

LTC (Ret) Robert Randolph Parks, age 83 of Johnson City, passed away peacefully on Thursday, January 6, 2022 at his home. He was a son of the late Charlie and Anna Fugate Parks, born to them on June 22, 1938 in Nickelsville, Virginia. He united... View Obituary & Service Information

The family of LTC (Ret) Robert Randolph Parks created this Life Tributes page to make it easy to share your memories.

Send flowers to the Parks family.