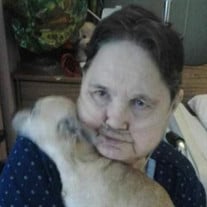 Louise Stines O’Quinn, age 82, of Elizabethton, Tennessee, went home to be with the Lord on Thursday, June 04, 2020 at the Life Care Center of Elizabethton. Louise was born in Keokee, Virginia to the late Emerson and Mary Hawkins Stines. In addition to her parents, she was preceded in death by her husband, Fred O’Quinn; the father of her children, Harold Clifton Lusk; a son, Michael James Lusk; a daughter, Barbara Lusk; two step sons, Robin Lee Lusk and Charles Edward Lusk; a grandson, Sean Clifton Lusk; and several brothers and sisters. Louise was a tough, stubborn, feisty and loving mother and grandmother. She would do anything for her family and she was a member of Prayer Tabernacle. Louise had worked as a seamstress at Denise Lingerie and she loved spending time with her grandchildren, watching old movies, fishing and spoiling her dogs. Those left to cherish her memory include her children, Mary Taylor and husband James, Patricia Oliver and husband Jerry, William Lusk and wife Roxanna and Beulah Butler, all of Elizabethton; her brother, Jake Stines, of North Carolina; three sisters, Efferetta O’Quinn, of Elizabethton, Carolyn Thompson, of Virginia and Kathy Estep, of Elizabethton; two step sons, Joseph Lusk and Gary Lusk and wife Kim, all of North Carolina. Several grandchildren, great grandchildren, nieces and nephews also survive. A service to celebrate the life of Louise Stines O’Quinn will be conducted 7:00 PM on Sunday, June 7, 2020 in the chapel of Tetrick Funeral Home, Elizabethton with Rev. Johnny Hilton and Pastor Kenneth Davis, officiating. The family will receive friends from 5:00 PM until 7:00 PM in the funeral home chapel, prior to the service on Sunday. The family would like to extend a special thank you to the nurses, doctors and staff of the Life Care Center of Elizabethton for the love and care shown to Louise during her illness. Those who prefer memorials in lieu of flowers, may make donations to the Alzheimer’s Association, 2319 Browns Mill Road, Johnson City, TN 37604 or to the Carter County Animal Shelter, 135 Sycamore Shoals Drive, Elizabethton, TN 37643. Online condolences may be shared with the family on our website, www.tetrickfuneralhome.com Louise and her family are in the care of Tetrick Funeral Home, Elizabethton. Office 423-542-2232, service information line, 423-543-4917.

Louise Stines O&#8217;Quinn, age 82, of Elizabethton, Tennessee, went home to be with the Lord on Thursday, June 04, 2020 at the Life Care Center of Elizabethton. Louise was born in Keokee, Virginia to the late Emerson and Mary Hawkins Stines.... View Obituary & Service Information

The family of Louise Stines O'Quinn created this Life Tributes page to make it easy to share your memories.

Send flowers to the O'Quinn family.