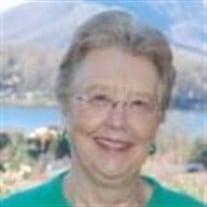 Linda Faye Miller Carder passed away October 3, 2019, at her home in Chapin, SC, after a long battle with Frontotemperal Dementia. She was surrounded by her loving husband of fifty-eight years, Kenneth, and their two daughters, Sheri Carder Hood and Sandra Carder Nash. She was preceded in death by her parents, David Mack Miller and Leila Leach Miller. In addition to her husband and two daughters, she is leaving her sons-in-law Kyle Nash and John Hood and five grandchildren: Katelyn Nash Aiken, Emily Nash, Michael Nash, Megan Hood, and Julia Rose Hood. Linda was born in Johnson City, Tennessee, December 29, 1939, and grew up in Elizabethton, Tennessee, where she graduated from Elizabethton High School. Linda was a lifelong Methodist and grew up in First United Methodist Church, Elizabethton, TN. As a youth and young adult, she was active in church camps and the local church, district, and conference ministries. At the time of her death, she was a member of Salem United Methodist Church in Irmo, SC and an Affiliate Member of First United Methodist Church, Waynesville, NC. She attended Emory and Henry College, graduating in 1961, with a BA degree in religious studies. As a first-generation college graduate, Emory and Henry had a lifelong influence on Linda, helping to shape her values, worldview, and sense of calling. It was in speaking in a local church on the importance of a church-related college that she remembered meeting her future husband, who was president of the youth group to which she was speaking. Following graduation in 1961, Linda and Kenneth married, and Linda worked at East Tennessee State University while Kenneth completed his degree. They moved to Gaithersburg, MD, for Kenneth to attend Wesley Theological Seminary in Washington, D.C. Linda worked part-time at St. Dunstan Episcopal Church and audited classes at the seminary. In 1965, Linda and Kenneth returned to their native Holston Conference where they served local congregations in Bluff City, Abingdon, Virginia, Concord, Oak Ridge, and Knoxville, Tennessee. Linda considered her primary vocational calling to be the nurturing of family as a mother, spouse, and later grandmother. She taught children’s Sunday school, led leadership training events for teachers, helped to initiate a preschool ministry Pleasant View UMC Abingdon, VA, and served in numerous outreach ministries. But her primary vocation was providing loving nurture and steadfast support for her daughters and husband. When Kenneth was elected to the United Methodist episcopacy in 1992 and assigned to the Nashville Area, Linda’s exceptional gifts for organization and hospitality came to the forefront. Always the consummate organizer of family activities and celebrations, she regularly prepared large dinners without paid assistance. She insisted that the chores of housecleaning, meal preparation, and serving were themselves part of her gift to guests. It was also a reflection of her working-class values and genuine commitment to servant ministries. Linda and Kenneth moved to Jackson, MS, in 2000 and Linda continued her supportive and servant ministries of hospitality. During her mother’s illness and subsequent death in 2001, Linda returned to Elizabethton, TN for several months to care for her mother. When Kenneth suffered a heart attack in 2002, Linda’s vocation as caregiver continued until his recovery. Upon Kenneth’s retirement as a bishop in 2004, they moved to Durham, NC where Kenneth joined the faculty of Duke Divinity School. In 2009 Linda was diagnosed with Frontotemporal Dementia, which represented her most formidable challenge. She and Kenneth subsequently moved to Chapin, SC to be near their daughters and grandchildren. As the disease inexorably diminished her capacities, she never lost her ministry of teaching and hospitality. Now she taught by being rather than doing and by receiving the love and care of others. Linda’s lifelong practices of dignity, perseverance, self-respect, hospitality and generous love were so embedded in her identity that they prevailed through what has been called “the long goodbye.” Her life is testimony to the truth that though language and knowledge may pass away, love remains. Two memorial services are scheduled. The first will be at Salem United Methodist Church, Irmo, SC, October 6, at 3:00 p.m., officiated by Bishop J. Lawrence McCleskey and The Reverend Gary Phillips, with visitation following. The second service is set for Tuesday, October 8, at 2:00 p.m. at First United Methodist Church, Waynesville, NC, with Bishop J. Lawrence McCleskey, Bishop Richard Looney, The Reverend Barbara Garcia, and The Reverend Keith Turman officiating. The family will greet guests following the service. In lieu of flowers, memorials may be given to the Linda Miller Scholarship Fund at Emory and Henry College, Emory, VA, or United Methodist Committee on Relief, USAgainst Alzheimer’s, or a charity of your choice. 101 K Street NW, Suite 400, Washington, DC 20005. Garrett Funeral Home is caring for the family. A message of comfort may be made to the family at www.garrettfuneralsandcremations.com

Linda Faye Miller Carder passed away October 3, 2019, at her home in Chapin, SC, after a long battle with Frontotemperal Dementia. She was surrounded by her loving husband of fifty-eight years, Kenneth, and their two daughters, Sheri Carder... View Obituary & Service Information

The family of Linda Faye Miller Carder created this Life Tributes page to make it easy to share your memories.