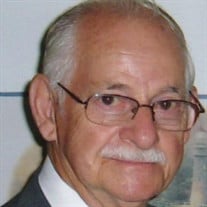 Click here {https://www.oneroomstreaming.com/view/authorise.php?k=160245173480652} to view a Live Stream of Leonard Edwards funeral ceremony. Leonard Edwards, age 88 of Johnson City, Tennessee, went to be with his Lord and Savior on Saturday, October 10, 2020 at his home. He was a son of the late Dan and Berta Tapp Edwards born to them on August 29, 1932 in Erwin, Tennessee. Leonard attended the Elizabethton High School and was a sergeant in the United States Army and served 10 years in the reserves. He worked at A.F.G for 38 years and after retiring, worked for Sears as a part-time associate for 11 years. He was a faithful member of Buffalo Ridge Baptist Church. Along with his parents, he is preceded in death by a daughter Dawn Dawn “Dawnie” Maples; four brothers and two sisters. He is survived by his wife, Joan Edwards; Sons: Mark Edwards, Terry Edwards and Randy Edwards; a daughter, Karen Smith; Eight grandchildren and thirteen great-grandchildren. He was a devoted husband and loving father. He had many friends and will be missed greatly. A funeral service for Leonard Edwards will be conducted on Tuesday, October 13, 2020 at 7:00 P.M. in the chapel of Tetrick Funeral Services with Pastor Deven Smith and Pastor John Herdman officiating. The family will receive friends at the funeral home on Tuesday after 5:00 P.M. until the hour of service at 7:00 P.M. A graveside service for Leonard will be held on Wednesday, October 14, 2020 at 11:00 A.M. in the Washington County Memory Gardens with Terry Edwards, Mark Edwards, Randy Edwards, Tyler Edwards, David Smith and Kassin Orvise serving as pallbearers. Those wishing to attend are asked to meet at the cemetery no later than 10:50 A.M. The family would like to extend their deepest appreciation to Joyce Bailey and Debbie Wright, and the other nurses and CNA’s that worked for Amedisys. They went above and beyond to make Leonard’s passing peaceful. The family would also like to thank the V.A. Hospital for all they have done. Because of all the wonderful care Leonard received throughout his illness, he was able to be at home with his family. Memories and condolences may be shared at www.tetrickfuneralhome.com. Tetrick Funeral Services 3001 Peoples Street Johnson City, TN 37604 (423-610-7171) is honored to serve the Edwards Family.

The family of Leonard Edwards created this Life Tributes page to make it easy to share your memories.

Send flowers to the Edwards family.