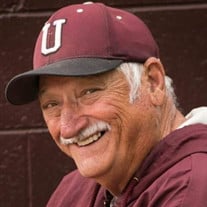 To watch the livestream of the service, click on the link below: https://view.oneroomstreaming.com/authorise.php?k=1651004639180605 Larry “Bobo” Bowling went home to be in the presence of his Lord and Savior on Saturday, April 23, 2022 at his residence at the age of 79. Larry was a lifelong resident of Elizabethton and was born December 9, 1942 to the late Herman C. Bowling and Mary White Bowling. In addition to his parents, Larry has been reunited with his loving wife, Sherry Lou Smith Bowling, who departed this life on September 10, 2013; three brothers, Joe Bowling, Bob Bowling and Sonny Bowling; and one sister, Brenda Hawks. Larry attended Elizabethton High School, during which time he was a four-year varsity player in Basketball and Track and Field. After graduating from Elizabethton High School in 1963, Larry first attended Hiwassee Junior College and then later Milligan College, continuing his athletic career in college. Upon completing his education, Larry dedicated his life to serving others. Between his active duty and reserve service, Larry served his country in the United States Army for 38 years. He returned home to Carter County and began a career as a teacher and coach. His teaching career lasted for just over 40 years. Larry began racking up accolades as a high school coach and a TSSAA official. He was part of several championship tournament teams, including the 2004 boys basketball State Champion team, the 2017-18 girls basketball state tournament team, and the 2018 girls softball state tournament team. Larry was honored by the TSSAA for serving 53 years as a TSSAA Football Official. Larry has spent his life demonstrating a deep devotion to his family, to his community, and to helping others. Those left to cherish and remember Larry’s legacy are his two children, Kevin (Ashley) Bowling of Jonesborough and Heather (Eric) Tester of Elizabethton; two grandchildren, Payton Tester and Paisley Bowling; his sister, Kathy (Mike) Smith of Elizabethton; his favorite brother-in-law, Eddie Smith of Elizabethton and his favorite sister-in-law, Vickie Smith of Elizabethton. Several nieces, nephews, friends, neighbors and church family also mourn his loss. A service to honor the life of Larry “Bobo” Bowling will be conducted at 7:00 PM on Thursday, April 28, 2022 in the Chapel of Peace at Tetrick Funeral Home, Elizabethton with Pastor Nathan Jennings and Pastor Bill Greer officiating. The family will receive friends from 3:00 PM until 7:00 PM in the funeral home chapel prior to the service on Thursday. The service will be livestreamed. To watch the livestream simply go to our website, www.tetrickfuneralhome.com and click on Larry’s obituary. Under his obituary tab the link will be displayed at the top of the obituary, simply click on the link and the service will start at promptly 7:00 PM. The graveside service will be conducted at 10:00 AM on Friday, April 29, 2022 at Mountain Home National Cemetery (Historic Section). Active pallbearers will be Kevin Bowling, Eric Tester, Taz Erwin, Walt Pierce, Jody Crowe, C.Y. Peters, Jarfly Dugger, Bo Higgins, Kenneth Chambers and Jimmy Ensor. Honorary pallbearers will be Junior Guess, Eddie Smith and Roger Shaw. Those wishing to attend the graveside service are asked to meet at Mountain Home National Cemetery at 9:50 AM on Friday. The family would like to especially thank the staff of Caris Healthcare for the kind and compassionate care shown to Larry and his family during his illness. Though we will miss his smile, his laugh and his love, we rejoice in knowing there is no more pain, no more suffering and we will one day rejoin him in God’s eternal kingdom. Those who prefer memorials in lieu of flowers may make donations to the Unaka High School Girls Athletics Program, 119 Robinson Lane, Elizabethton, TN 37643 in memory of Larry “Bobo” Bowling. Words of comfort can be sent to the family through our website, www.tetrickfuneralhome.com. Tetrick Funeral Home-Riverside Chapel, 211 North Riverside, Elizabethton, TN 37643 (423) 542-2232 is honored to serve the family of Larry “Bobo” Bowling.

The family of Larry "Bobo" Bowling created this Life Tributes page to make it easy to share your memories.

To watch the livestream of the service, click on the link below:
https://view.oneroomstreaming.com/authorise.php?k=1651004639180605

Send flowers to the Bowling family.