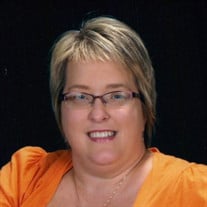 Kimberly Renee “Kim” Buckner, age 54, of Elizabethton, TN passed away Saturday, June 19, 2021 at Select Specialty Hospital, Bristol, TN. She was the daughter of the late John Bell Holsclaw, Sr. and Donna Hendrix Holsclaw. Kimberly was a long time employee of 30 years as a Pharmacy Technician for Johnson City Medical Center. She was a 1985 graduate of Elizabethton High School and a member of Elizabethton Church of Christ. Kimberly never met a stranger. She loved to be around people and her dogs (Jack and Bootsie.) In addition to her parents, she was preceded in death by her sister, Christie Michelle Holsclaw; paternal grandparents, Fred and Susan Holsclaw; maternal grandparents, Cody and Irene Hendrix; mother-in-law and father-in-law, Bill and Joann Hill and several aunts, uncles and cousins. Those left to cherish her memory include her husband, Brian Buckner, of the home; a sister, Dr. Tammy Holsclaw-Jones and husband Randy; a brother, John Holsclaw, Jr. and wife Sheri, all of Johnson City and several nieces and nephews also survive. A service to celebrate the life of Kimberly Renee “Kim” Buckner will be held at 8:00 P.M. on Wednesday, June 23, 2021 in the Chapel of Peace at Tetrick Funeral Home, Elizabethton with Mr. Eddy Craft, Minister and Mr. Todd Houston, Minister officiating. Music will be under the direction of Chris Jordan. The family will receive friends between the hours of 5:00 P.M. and 8:00 P.M. prior to the service on Wednesday. The graveside service and committal will be conducted at 11:00 A.M. Thursday, June 24, 2021 at Happy Valley Memorial Park, Johnson City. Active pallbearers are Ronnie Taylor, Jimmy Oxendine, Jeff Huffman, Scott Fields, Alex Jones, Jeff Holsclaw, Ethan Cannon and Steve Roberts. Honorary pallbearers are Members of Elizabethton Church of Christ, past co-workers and pharmacists at Johnson City Medical Center and especially Dr. Fawwaz Hamati and Dr. Jason Hatjioannou. Those who will be attending the graveside are asked to meet at the funeral home at 10:15 A.M. on Thursday to go in procession to the cemetery. Those who prefer memorials in lieu of flowers may make donations to High Rock Bible Camp, P.O. Box 1454, Elizabethton, Tennessee 37644 or to Elizabethton Church of Christ, 137 East C Street, Elizabethton, TN 37643. Online condolences may be shared with the family on our website, www.tetrickfuneralhome.com Tetrick Funeral Home, Elizabethton is honored to serve the Buckner family. Office 423-542-2232, service information line, 423-543-4917.

The family of Kimberly Renee "Kim" Buckner created this Life Tributes page to make it easy to share your memories.

Send flowers to the Buckner family.