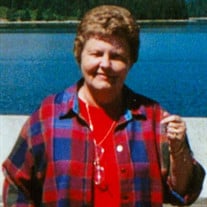 June C. Buckles of the Gray community, passed away peacefully on Wednesday, August 25, 2021 in the Johnson City Medical Center. She was the daughter of the late John W. and Arbelle Adams Chandler, born to them on July 2, 1942 in Fordtown, Tennessee. June was an active member of the Hales Chapel Christian Church of Gray and will always be remembered for her years of volunteer work. For over 20 years, June volunteered at the Johnson City Medical Center and also worked with the Appalachian Fair for over 30 years. Along with her parents, June is preceded in death by her brothers; Charles Eddie Chandler, Otis Chandler and an infant brother and sister. June is survived by her loving husband of 58 years, Larry H. Buckles of Gray, Tennessee; her children, Cindy (Steve) Wine of Gray, Tennessee and Mike (Eva) Buckles of Knoxville, Tennessee; her grandchildren, Chris (Sharon) Wine, Cody (Keshia) Wine, and Kristina (Joel) Meyers; her great-grandchildren, Ethan Wine, Lane Kyte, Kyndel Wine and Camryn Wine; a brother-in-law and sister-in-law, Terry and Florette Buckles. June is also survived by several nieces, nephews and other family members left behind to cherish her memory. Funeral services for June C. Buckles will be conducted on Monday, August 30, 2021 at 7:00 P.M. in the Hales Chapel Christian Church of Gray, with Minister Lamar Garrison and Minister Tim Ramsey officiating. The family will receive friends at the church on Monday evening after 5:00 P.M. until the hour of service at 7:00 P.M. June will be laid to rest on Tuesday, August 31, 2021 at 11:00 A.M. in the Mountain Home National Cemetery with Grandchildren and family serving as pallbearers. Honorary pallbearers will be Lane Kyte and the men of the Hales Chapel Christian Church. Those wishing to attend are asked to meet at the cemetery no later than 10:50 A.M. In lieu of flowers, donations may be made to the Hales Chapel Christian Church in loving memory of June C. Buckles. The family would like to extend their deepest gratitude to the nurses and staff of the 2200 Ward of the Johnson City Medical Center for the excellent care and compassion that was shown to June and her family during her illness. Memories and condolences may be shared at www.tetrickfuneralhome.com. Tetrick Funeral Services 3001 Peoples Street Johnson City, TN 37604 (423-610-7171) is honored to serve the Buckles Family.

June C. Buckles of the Gray community, passed away peacefully on Wednesday, August 25, 2021 in the Johnson City Medical Center. She was the daughter of the late John W. and Arbelle Adams Chandler, born to them on July 2, 1942 in Fordtown, Tennessee.... View Obituary & Service Information

The family of June C. Buckles created this Life Tributes page to make it easy to share your memories.

June C. Buckles of the Gray community, passed away peacefully...

Send flowers to the Buckles family.