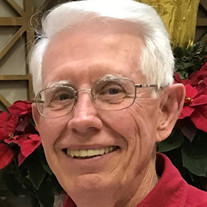 John Peter Veerling, Jr., died at Johnson City Medical Center three weeks after a biopsy at Duke Cancer Center disclosed an aggressive brain tumor. Pete was born on August 22, 1941 in Tucson, Arizona and died August 27, 2021. His family left Tucson for Queens, NY, when Pete was five years old. He then completed his childhood in Packanack Lake, NJ. Pete graduated from Bucknell University with a BS in Biology which led him to a position with the FDA in Baltimore, MD. He then earned a MS in Radiation Biology from the University of Tennessee, Knoxville, subsequently working for the AEC in Bethesda, MD. Realizing he was meant to work with people as well as machines he completed a post-graduate program in Radiological Physics at MD Anderson Cancer Center in Houston, TX. He retired after more than 30 years in the field of Medical Physics which included: Baptist Memorial Hospital, Memphis, TN; St. Vincent Hospital, Birmingham, AL; Johnson City Medical Center, Johnson City, TN; and private consulting. The thread throughout Pete’s life was his Christ-inspired volunteerism. He led a Cub Scout Troop; Boy Scout Troop (he and his son are Eagle Scouts); coached his daughter’s soft ball teams; participated in ASP summer trips; taught children at Coalition 4 Kids how to play his beloved handball; and participated in disaster relief trips to Lebanon, TN. and Port St. Joe, FL. He was a believer in local/regional outreach and demonstrated that by his work in Pineville, KY. However, he realized his real calling when he began participating in the deacons’ hospital visitation program of Central Baptist Church. He was able to touch many lives through his presence and prayers. Pete is pre-deceased by his parents John Peter Veerling and Helen Frances Moulton Veerling; one sister, Elizabeth Veerling; and one infant son. Left to cherish his memory are his wife of 58 years, Phoebe Smoot Veerling; son John P. Veerling, III (Susan) of Lighthouse Point, FL; daughter Deborah L. Cogswell (Aron) of West Chester, PA; and five grandchildren - Samantha Veerling, John P. Veerling IV, Tanner Cogswell, Luke Cogswell and Jack Cogswell; and one sister Susan J. Veerling of Ho-Ho-Kus, NJ. No services are planned at this time. If you desire to make a gift in Pete’s memory he would love for you to contribute to MD Anderson Cancer Center or the Appalachian Service Project of Johnson City, TN. Memories and condolences may be shared at www.tetrickfuneralhome.com. Tetrick Funeral Services, 3001 Peoples Street, Johnson City, TN 37604, is honored to serve the Veerling family. (423) 610-7171

The family of John Peter Veerling Jr. created this Life Tributes page to make it easy to share your memories.

Send flowers to the Veerling family.