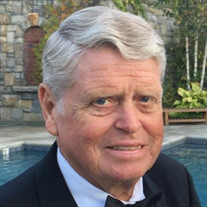 John Theodore Larsen August 23, 1942 – September 10, 2021 With great sadness, the family of John ‘Ted’ Larsen shares his passing at the age of 79 on Friday evening, September 10th. Ted, the youngest child of second generation Norwegian and Swedish parents was born in Portland, Maine and grew up in Boston, MA. As a young man, he attended Boston Latin and graduated from Boston English High School. He was awarded a baseball scholarship to the University of New Mexico at Albuquerque where he graduated with a BA in Physical Education. He enlisted in the U.S. Navy; as a Medic he was attached to the Marines as a Hospital Corpsman. In Vietnam, he served with the 1st Battalion 9th Marines who were nicknamed “The Walking Dead” from 1966-1967. Ted raised his family in Saco, ME and later moved to Johnson City, TN, where he was a member of Munsey Memorial UMC. Professionally, he enjoyed a forty-five year career in industrial sales; beginning with 3M Co. and concluding with retirement after more than 25 years in his own business. Ted, a natural athlete who was fiercely competitive, excelled in most sports. He played collegiate baseball, was a state champion racquetball player and enjoyed golf throughout his life. He was a force of laughter with his politically incorrect humor and colorful vocabulary. He never met a stranger and always saw the good in people. He is remembered as a wonderful man, who loved his family and his friends, and was loyal to them. A humble and hard-working man of strong character, Ted was a man of his word, and a man who held himself and those around him to high standards. Ted was predeceased by his parents Haakon and Helen Larsen, his sister Edytha Moran, his brother Dick Larsen, his niece Donna Larsen and his in-laws John Robert and Anne Bell. He is survived by his wife Nan (nee Bell) of 47 years, his children, Laura (Andy)Eversbusch, Sally (Todd) Blankenship and Tyler Larsen; his grandchildren Jake, Reese and Liv Blankenship. He is also survived by several nieces, nephews and their families. To remember his full and rewarding life, a Celebration of Life will be held Friday, October 15th, at The Carnegie Hotel 5-7:30 pm. As a proud veteran, he will be put to rest at the Mountain Home National Cemetery. In lieu of flowers, memorials may be made to the charity of your choice.

The family of John "Ted" Larsen created this Life Tributes page to make it easy to share your memories.

Send flowers to the Larsen family.