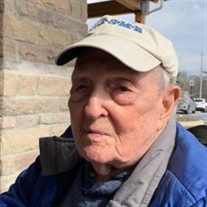 Jerry H. Rust, Jr., age 95, passed on August 20, 2021 at the Johnson City Medical Center under the loving care of the nurses and staff of the Fourth Floor. Jerry died from a relatively short bout of Congestive Heart Failure but for most of his long life he was blessed with good health. Jerry was born on November 9, 1925 in western Kentucky in an area known for beautiful rolling hills, occasional strip mines, John Prine, Merle Travis and the Everly Brothers. Jerry, or “JH” as he was known, always hearkened back to his memories of his youth and family in Kentucky, of growing up on the farm and then moving to the big city of Madisonville where he was the sole child and center of attention of his parents who predeceased him, Jerry H. Rust, Sr. and Pearl Rust, know to everyone as “Nanny.” Jerry was the first in his family to attend college and enrolled in Peabody College, now Vanderbilt University’s Peabody College of Education. His studies were interrupted by World War II and as soon as he turned 18, and over Nanny’s objection, he enlisted in the Army Air Force. Jerry’s poor eyesight prevented him from fulfilling his dream of becoming a pilot but he served with distinction and, by the War’s end, he was discharged with the rank of Sergeant. He returned to Peabody and went on to receive not only his undergraduate degree but a Ph.D in Education. Somewhere along the way he became a Certified Public Accountant and, for most of his life, taught accounting courses for extra money and because he loved the classroom. Jerry spent most of his work life in higher education, holding administrative positions with the State of Tennessee and the State of Georgia. In his later years he worked for the State of Kentucky, Western Kentucky University and eventually found his way to East Tennessee State University, where he fell in love with the mountains surrounding Johnson City. After retirement, Jerry and his wife Judy, his best friend, greatest love and constant companion who survives him, moved to Roan Mountain where they spent many years enjoying the incredible views and the people who joined them in this small community. Jerry loved his family. In addition to his wife, Judith W. Rust, he is survived by children Pamela Neal of Bristol, Tn.; Michael Rust (Lora) of Atlanta, Ga.; Elizabeth Singer (Phil) of Bowling Green, Ky.; and Jenny Wansack of Bowling Green Ky. His grandchildren, who he adored, are Abby Dickert (George) of Greenville, S.C.; LCDR Russell Neal (Rachel) of Iwakuni, Japan; Allie Flowers (TC) of New Orleans, La.; Hunter Rust of New Orleans, La.; and Anna May (Bradley) of Bowling Green, Ky. His surviving great grandchildren are Mason Dickert, Elliot Flowers, and Reed Neal. Jerry loved to hike and be in the mountains. Some of his favorite spots were the overlooks and balds on Roan Mountain and the trails of the Smokey Mountain National Park where he vacationed with Pamela and Michael when they were young. He and Judy loved to travel and Alaska was one of their favorite destinations. Jerry was a die-hard Atlanta Braves fan and always felt that more pitching was needed. He died knowing that the Braves were in first place in the National League East. No one was a stranger to him. He would strike up a conversation with anyone and everyone about anything and everything. He will be missed. Jerry and Judy were members of the First Methodist Church of Johnson City and the family thanks the members for their support. There will not me a memorial service and the family will mourn privately. Please consider a contribution to the Church or the American Heart Association in his memory. Memories and condolences may be shared at www.tetrickfuneralhome.com. Tetrick Funeral Services 3001 Peoples Street Johnson City, TN 37604 (423-610-7171) is honored to serve the Rust Family.

Jerry H. Rust, Jr., age 95, passed on August 20, 2021 at the Johnson City Medical Center under the loving care of the nurses and staff of the Fourth Floor. Jerry died from a relatively short bout of Congestive Heart Failure but for most of... View Obituary & Service Information

The family of Jerry H. Rust Jr. created this Life Tributes page to make it easy to share your memories.

Send flowers to the Rust family.