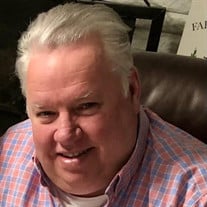 Click here to view a live stream of Jeff's Funeral Service. Mr. Jeffrey “Jeff” Allen Cantrell, 56, of Gray, passed away at his home on Thursday, April 22, 2021. Jeff was a graduate of Richlands High School class of 1982 where he was a proud Blue Tornado football player. He attended Southwest Virginia Community College, became a licensed auctioneer and real estate broker, and owned Richlands Realty and Auction Co. until he relocated to Johnson City, Tennessee, in 2006. He was a member of Gate City United Pentecostal Church and was known for being a jokester and the comedian of the family. He was an avid sportsman and loved being outdoors. Survivors include his wife and love of his life of thirty-seven years, Sherry “Pamela” Deel Cantrell; one son, Jeffrey Cantrell and wife Monica; two daughters, Jessica Cantrell and Sarah Towler and husband Jordan; three grandchildren who were his pride and joy, Ayden, Rylan, and Addie; his parents, Kermit and Barbara Cantrell; two sisters, Tywanna Clover and husband Gary and Kimberly Mason and husband Kevin; one brother, Greg Cantrell; several nieces and nephews. A private funeral service will be held on Sunday, April 25, 2021, at Tetrick Funeral Services in Johnson City with Danny Grizzle and Brian Ratliff officiating. Burial will follow in the Washington County Memory Gardens with Dave Brister, Ben Cantrell, Gary Clover, Nathaniel Clover, Kevin Mason, and Brian Ratliff serving as pallbearers. Those wishing to attend the funeral service, may join the family virtually on Sunday, at 10:30 a.m. by visiting the funeral home website and following the Live Stream link on Jeffrey’s obituary. Memories and condolences may be shared at www.tetrickfuneralhome.com. Tetrick Funeral Services 3001 Peoples Street Johnson City, TN 37604 (423-610-7171) is honored to serve the Cantrell Family.

The family of Jeffrey "Jeff" Cantrell created this Life Tributes page to make it easy to share your memories.

Send flowers to the Cantrell family.