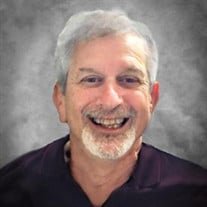 https://view.oneroomstreaming.com/authorise.php?k=1644705500166517 Jeffrey M. Goldstein – May 4, 1953 - February 10, 2022 Jeffrey Goldstein, 68, a longtime resident of Monticello, NY, died in Sycamore Shoals Hospital in Elizabethton, TN on February 10, 2022. Dr. Goldstein was born in Brighton Beach, NY on May 4, 1953 the son of David Moses Goldstein and Yetta Wolf. He received a BS from the University of Georgia, and a Doctor of Chiropractor from Life Chiropractic College. After 9/11, he used his skills to adjust those working at ground zero. He served the Monticello community for 25 years before retiring in July of 2021. Jeffrey was an avid football (Go Bull Dogs!) and hockey fan. He loved music, kayaking, and hanging out with his dog, Kiara. Survivors include his loving wife of thirty-eight years, Mary Elizabeth (Beth) Goldstein of Monticello, NY; daughter, Jessica of Hartford, TN; and two sons, Jared Goldstein and his wife Sara Ruggiero of Montana; and Trevor Goldstein of Albany, NY; grandson, Asher Bear Goldstein, and his sister, Roberta Helfant; and many nieces and nephews. He is predeceased by his brother, Harvey, his parents, and his cat, Jim Beam. Memorial service to be held at Tetrick Funeral Home, 211 North Riverside Drive, Elizabethton, TN 37643, on February 12, 2020 at 3:30 PM. Those who prefer memorials in lieu of flowers may make donations to the Bashakill Wetlands, P.O. Box 1121 Wurtsboro, NY 12790 in memory of Jeffrey Goldstein. Online condolences and memories of Jeffrey may be made at https://www.tetrickfuneralhome.com/. The Goldstein family has been entrusted to Tetrick Funeral Home, 211 North Riverside Drive, Elizabethton, TN 37644.

The family of Jeffrey Mark Goldstein created this Life Tributes page to make it easy to share your memories.

Send flowers to the Goldstein family.