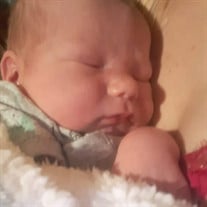 Jasper Chase Whitehead, age 1 month and 4 days, went home to become an angel on Saturday, October 9, 2021. He was the son of Layla Whitehead and Jonathan Mark Reynolds, born to them on September 5, 2021 in Johnson City, Tennessee. He is preceded... View Obituary & Service Information

The family of Jasper Chase Whitehead created this Life Tributes page to make it easy to share your memories.

Send flowers to the Whitehead family.