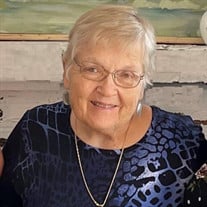 Janet Marie (Micol) Burgess passed away Sunday morning, October 10th at NHC Healthcare, Johnson City after a period of declining health. Born on May 1st, 1942 in Hickory, NC, she was the daughter of the late Robert E. Lee Micol and Frances Deal Micol. Growing up in the town of Valdese, North Carolina, she was very proud of her Waldensian Heritage. Janet was very active, along with her parents and sister in the Waldensian Presbyterian Church in Valdese. As an adult, she was a member of Wesley Memorial United Methodist Church in Johnson City where she worked with the Sunday School program, United Methodist Woman, and youth group. Janet attended Rock Elementary School and graduated from the Francis Garrou High School in Valdese. She graduated from East Carolina University in Greenville, North Carolina with a degree in science and mathematics education. Janet was a lifelong educator, teaching junior and senior high students for 44 years. She taught in Delaware, North Carolina, and Tennessee retiring from Science Hill High School in Johnson City as a chemistry teacher. She always enjoyed running into her former students, as she was passionate about education and was proud of the many students that she taught during her devoted teaching career. She was an active member of the Alpha Delta Kappa leadership organization for educators. In 2001, Janet was a District Finalist for the Tennessee Department of Education Teacher of the Year. In addition to her teaching career, Janet served many years as a Weight Watchers Counselor, a Girl Scout leader, and a Sunday School Teacher at Colonial Hills Nursing Home. Janet loved nature and especially growing her own wildflowers. A talented seamstress and needlecrafter, she handmade many items over the years including her daughter and granddaughter’s wedding dress. Following her retirement, she became an avid farmer working closely with Steve raising beef cattle on his farm in Unicoi. She enjoyed the science of farming and loved spending time learning about the animals, equipment, and business of farm life. Janet is survived by her daughter Leslie Clifton, and husband Calvin; granddaughter Megan Napier, and husband Collin; grandson Peyton Clifton, and wife Lindsey; her close friend Steve Sutphin; and great-grandchildren Llewyn and Kellen Napier and Elliana Clifton. In addition to her immediate family, she is survived by her brother-in-law Rev. Dr. Huw Christopher; nephew Micol Christopher, and wife Chin; great-nephew Andy; and numerous friends and relatives in the Valdese area of western North Carolina. She was proceeded in death by her parents Robert and Francis Micol, sister Rachel Christopher, and son-in-law Alan Young. Visitation will be held Thursday, October 14, 2021, from 11 am to 1 pm at Tetrick Funeral Services, 3001 Peoples Street, Johnson City. A private service will be held later.

Janet Marie (Micol) Burgess passed away Sunday morning, October 10th at NHC Healthcare, Johnson City after a period of declining health. Born on May 1st, 1942 in Hickory, NC, she was the daughter of the late Robert E. Lee Micol and Frances... View Obituary & Service Information

The family of Janet Marie (Micol) Burgess created this Life Tributes page to make it easy to share your memories.

Send flowers to the Burgess family.