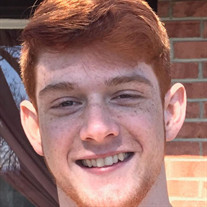 Jacob Patrick Carr, age 20, of Elizabethton, Tennessee passed away on Thursday, December 10, 2020 in Sevier County, Tennessee. Jacob was born in Elizabethton to Shawnie Estep Pate, of Kingsport and the late Patrick Kenneth Carr. In addition to his father, Jacob was preceded in death by his paternal grandfather, just days ago, Mr. Kenneth Carr. Jacob worked in the construction field and was considered a jack of all trades. He had a knack for being able to build or fix anything! He was full of love and was able to make anyone smile, and tried to do so to lift the spirits of his friends and family. Jacob was of the Christian faith and will forever be remembered for the joy he brought into the lives of those honored enough to have known him. He also had a love of the outdoors, among the things he enjoyed doing were fishing with his friends. Jacob was a light to others and loved the sunshine himself. A good story and being outside with his family and friends were his favorite things. Those left to remember and cherish his memories in addition to his mom, include his wife, Nichole Carr, of Elizabethton; his maternal grandparents, Jeanne and John Autry, of Kingsport; his paternal grandmother, Barbara Carr, of Elizabethton; two sisters, Josi Carr and Jonica Martin, both of Johnson City; and a step son, Jude Guinn, of Elizabethton. Several aunts, uncles, other extended family and many many friends also survive. Due to growing concern of the Covid-19 pandemic the family is postponing services at this time. In lieu of flowers the family requests that those who would like, make a donation to the charity of their choice and be a light unto others, as Jacob was to others. Online condolences may be shared with the family on our website, www.tetrickfuneralhome.com Tetrick Funeral Home, Elizabethton is honored to serve the Carr family. Office 423-542-2232, service information line, 423-543-4917.

The family of Jacob Patrick Carr created this Life Tributes page to make it easy to share your memories.

Send flowers to the Carr family.